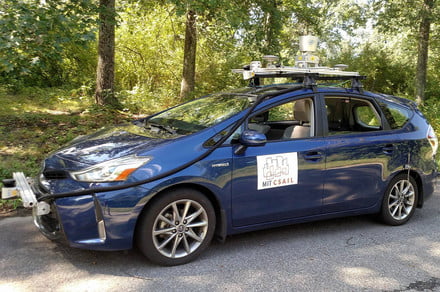 If you find yourself on a country road in a self-driving car, chances are you’re both pretty lost. Today’s most advanced autonomous driving systems rely on maps that have been carefully detailed and characterized in advanced. That means the millions of miles of unpaved roads in the United States are effectively off-limits for autonomous vehicles.

But a team of computer scientists from the Massachusetts Institute of Technology’s (MIT) Computer Science and Artificial Intelligence Laboratory (CSAIL) have designed a self-driving system aimed at successfully navigating unpaved roads by using basic GPS data and sensors technology.

“We were realizing how limited today’s self-driving cars are in terms of where they can actually drive,” Teddy Ort, an MIT CSAIL graduate student who worked on the project, told Digital Trends. “Companies like Google only test in big cities where they’ve labeled the exact positions of things like lanes and stop signs. These same cars wouldn’t have success on roads that are unpaved, unlit, or unreliably marked. This is a problem. While urban areas already have multiple forms of transportation for non-drivers, this isn’t true for rural areas. If you live outside the city and can’t drive, you don’t have many options.

Ort and his colleagues think their system, which they’ve named MapLite, could change that.

Using simple GPS data that can be found on Google Maps and an array of sensors to scan the surroundings, MapLite navigates along unpaved roads, observing road conditions over 100 feet in advance.

“Existing systems still rely heavily on 3D maps, only using sensors and vision algorithms for specific aspects of navigation, like avoiding moving objects,” Ort said. “In contrast, MapLite uses sensors for all parts of navigation, using GPS data only to obtain a rough estimate of the car’s location in space. The system first sets both a final destination and what we refer to as a ‘local navigation goal,’ which has to be within the view of the car.”

But there are good reasons why other autonomous system use detailed maps. For one thing, when they work, they work well. Put an advanced autonomous car on a road that’s been previously mapped, and you’re pretty much guaranteed that it will be able to navigate just fine.

MapLite, on the other hand, doesn’t come equipped with this experience and, thus, lacks the guarantee.

Moving forward, the CSAIL researchers will attempt make MapLite more versatile, capable of navigating various road types. They have no plans to commercialize the system yet, though Ort said they’re working with Toyota to incorporate the system into future vehicles.