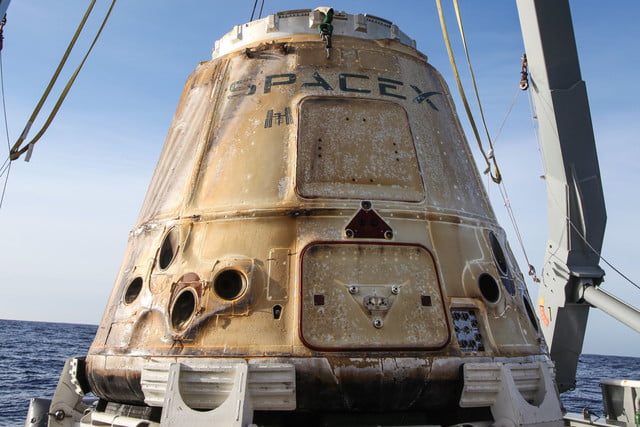 A SpaceX Dragon capsule loaded with two tons of cargo splashed down in the Pacific Ocean on Saturday. It was the second trip to outer space for the capsule, and the second time SpaceX had reused a Dragon for a supply mission to the International Space Station (ISS).

The capsule showed a little wear and tear from the reentry, but all the cargo (including a bunch of mice) was retrieved successfully by SpaceX. The capsule was loaded with the results of various scientific experiments, including an attempt to 3D print optical fiber in space. The mice had been treated with various medications that may help alleviate muscle loss during extended stays in a weightless environment.

The Dragon capsule was launched from Cape Canaveral on December 15, and it marked the first time that both a Falcon 9 rocket and a Dragon capsule had been reused. The capsule had previously visited the ISS in 2015 for a resupply mission. This was the 13th mission for SpaceX under NASA’s Commercial Resupply Services contract.

“Good splashdown of Dragon confirmed, completing the second resupply mission to and from the @Space_Station with a flight-proven commercial spacecraft,” SpaceX announced on Twitter.

Cargo missions using reusable rockets and capsules are now becoming routine for SpaceX. Elon Musk, the company founder, has said he wants to make the entire rocket, including the Falcon 9 upper stage, completely reusable by the end of this year.

At a teleconference with reporters in March, Musk said there’s no reason not to make the attempt. “We didn’t originally intend for Falcon 9 to have a reusable upper stage, but it might be fun to try like a Hail Mary. What’s the worst that could happen — it blows up?” he asked rhetorically. “It blows up anyway.”

“Rapid and complete reusability of rockets is really the key to opening up space and becoming a spacefaring civilization, a multiplanet species, and having the future be something that’s incredibly exciting and inspiring that we’ll all look forward to,” he added.

The next hurdle for SpaceX is a big one — the Falcon Heavy rocket, to be exact. The 27-engine behemoth will go through a test-fire this month, before a planned launch later this year. And Musk’s very own Tesla Roadster will go along for the ride.