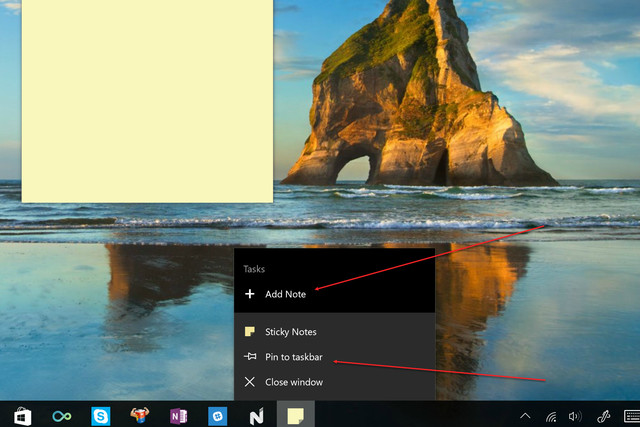 Microsoft has made it easier for you to make a Sticky Note and avoid cluttering up your real-life desktop.

Windows 10 is full of small utilities that add value by leveraging some of the core functionality built into the operating system. One example is the Sticky Notes app, which supports the Windows Ink feature and active pens to eliminate the need for sticking little slips of paper all over your desk.

Up until now, creating a new Sticky Note has been accomplished primarily by clicking or tapping on the pen icon in the system tray and selecting the app from the list of available Windows Ink utilities. With the latest update, Sticky Notes has added a new way to create notes along with other improvements, as OnMSFT reports.

Specifically, Sticky Notes now supports the jump list feature, letting users right-click on the taskbar icon to create a note. This is a nice little addition that makes creating notes easier not only for the pen-enabled but also for anyone who types Sticky Notes using the physical keyboard. If the icon is pinned to the taskbar, then that makes creating a new note as easy as right-clicking and selecting “Add Note” from the list.

The update also added a few other features, including a switch from the Segoe UI Emoji to Segoe UI, which Microsoft rather comically notes allows the app to support “¯_(ツ)_/¯.” The company also fixed the tendency for text to become jittery while a note is being resized, along with replacing the “Later” button with an “X.” Finally, launch performance was also improved.

You’ll need to be on the latest production version of Windows 10, 14393, or later to receive the Sticky Notes update. If your Windows Store app is configured to automatic updates and you’re on the proper Windows 10 version, then you likely already have the update installed. If not, then open the Windows Store, select “Downloads and updates” from the user account menu, and then tap or click “Check for updates.”