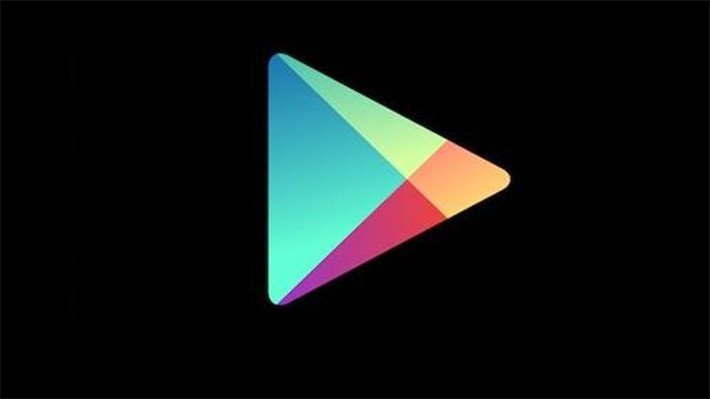 2014 was an exciting year. We saw the release of Lollipop and with it, a whole new design standard we now call Material Design. It saw the release of Android Wear and the second themer revolution with the Android Wear watch faces. Games are slowly becoming higher quality with better graphics, controls, and premises than any prior year. It was the most successful year in Android apps and games of all time. Let’s take a look at just how it good it was on paper. 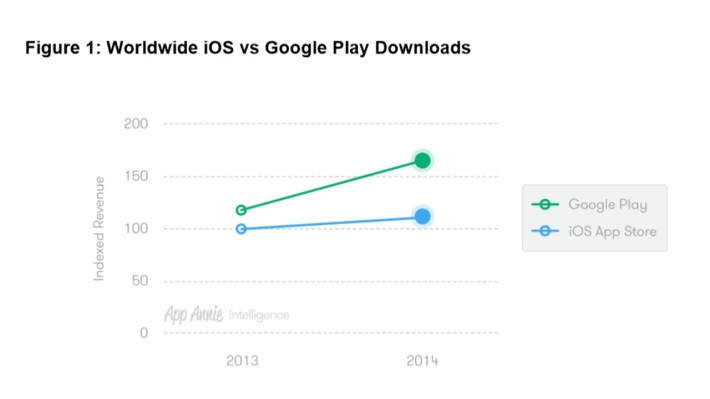 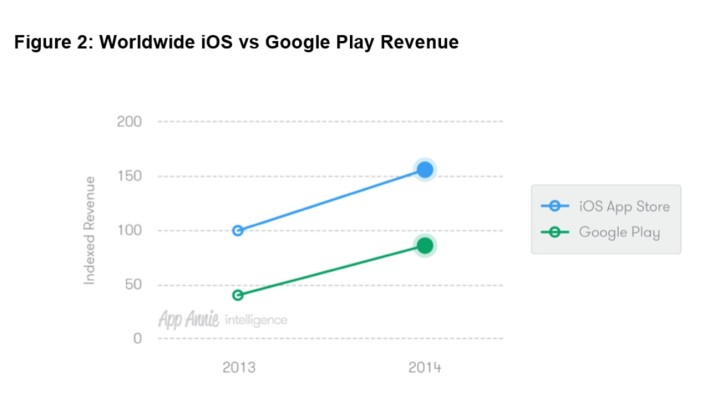 The takeaway:
As per the norm, the average iOS owners simply dole out more cash than the average Android user. It’s particularly interesting considering Android users outnumber iOS users by a wide margin. The reasoning for this is complicated. Some attribute it to piracy. Others attribute it to iOS getting the app while it’s hot in the headlines while Android gets it as an afterthought later. Others still believe it’s because many Android users (primarily in China) don’t have access to Google Play, paid apps, or both. The thing is that everyone is at least a little bit right. 3. Market Group Performance Based on iOS and Google Play Data

The takeaway:
The most important thing here is that every group saw at least some growth in both revenue and downloads. The largest revenue growth went to the emerging markets group while the largest download growth went to the markets to watch group. OEMs such as Motorola (Moto G), Meizu, Xiaomi, and others have been releasing cheap phones targeted at emerging markets to both bolster and take advantage of stats like these. There is no doubt that their devices also played a roll in the revenue and download growth as better phones were made more affordable in more places. Despite that, the USA, South Korea, and Japan remain the global leaders in both overall download and revenue numbers. The takeaway:
Messaging, travel, and transportation are huge industries worldwide. Servies like Lyft and Uber are revolutionizing the transportation industry while apps like Airbnb, Homeaway, and Couchsurfing tackle travel. We all knew messaging was growing fast as apps like Whatsapp bragged about 700 million users and Line hit the 400 million mark recently. Unsurprisingly, all of these apps and more saw growth showing that people are embracing the new ways of doing things. 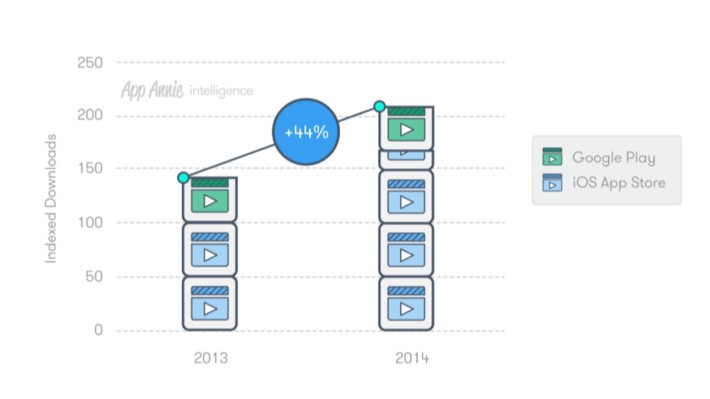 The takeaway:
This is something that practically anyone could have predicted. More countries are getting faster Internet and that makes streaming video not only more attractive but more accessible. Existing companies like Hulu, Amazon Prime, and Netflix have done great work expanding their library and sports apps have found better success than years past as their own streaming apps improve. Much like Uber and Lyft in the transportation industry, we’re seeing a paradigm shift in how people engage with video content and we expect that to continue into 2015. 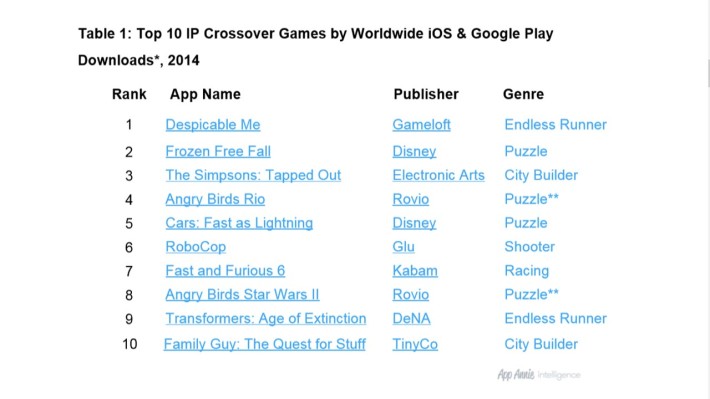 The takeaway:
Larger companies are finally taking the mobile platform more seriously. While the names of the apps are certainly promising, the bigger picture here is the publisher name. Gameloft, Disney, Electronic Arts, Rovio, Glu, and DeNA are heavy hitters in the mobile industry and a couple of those are heavy hitters in the gaming industry as a whole. Large studios making name brand games for mobile is something that mobile gamers have been yearning for. It’s true they could explore some other genres but it’s a start. 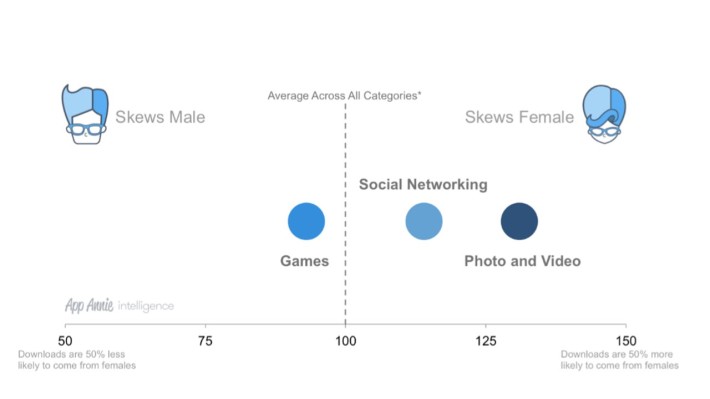 7. Relative Composition of Downlaods by Women Across iOS App Store categories in the US

The takeaway:
These statistics are a total surprise, said nobody, ever. It is worth noting that it’s not all photo, video, and social networking apps that are beloved by women. App Annie does state that visual discovery apps like Pinterest skew these statistics some and they also note that such apps are great for companies looking to build a mobile presence. 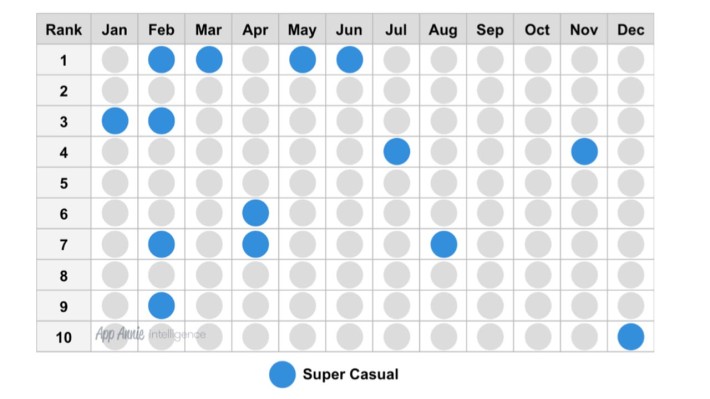 The takeaway:
There are two perspectives to look at this. From one perspective, it’s safe to say that super casual games like Flappy Bird won’t be taking over. Despite the monumental success and nearly overwhelming wave of emulations and copycats, super casual games didn’t make the huge cultural impact that many thought. From the other perspective, super casual games aren’t going anywhere. They are routinely in the top ten games on both Android and iOS so it’s safe to assume that the genre will continue to exist and be popular for years to come and it’s just a matter of waiting for the next viral hit. 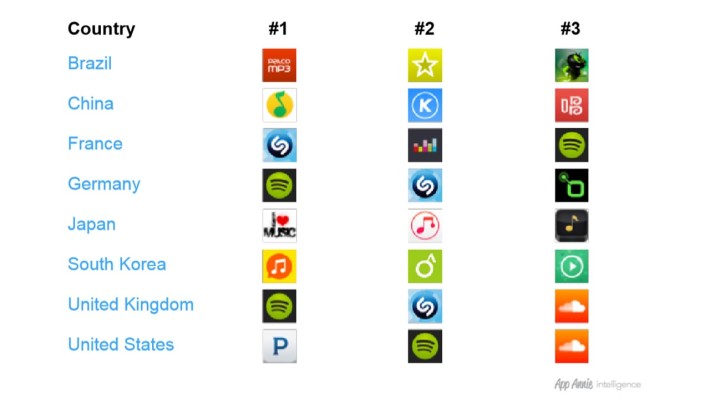 The takeaway
There are other factors at play here aside from just a love for local music. Many streaming apps don’t have licenses to operate in certain countries and, thus, don’t have a presence there at all. Those apps also don’t always have the licenses to distribute local music which makes the localized music apps the only way to get some artists. Licensing does play a huge roll in this list. The music streaming industry is a huge competition right now and it doesn’t take a rocket scientist to know that it’ll continue to be that way in 2015. The takeaway:
The biggest takeaway here is that monetization continues to be a huge problem in India. The inclusion of Turkey and Indonesia to the top 10 downloads chart is proof that emerging markets are having an effect on the Google Play Store in terms of downloads but emerging markets have contributed very little to Google Play revenue. This shows that Google needs to work more on monetization in those emerging markets. The revenue chart is more or less the same as it was in 2013 and that’s not good news. 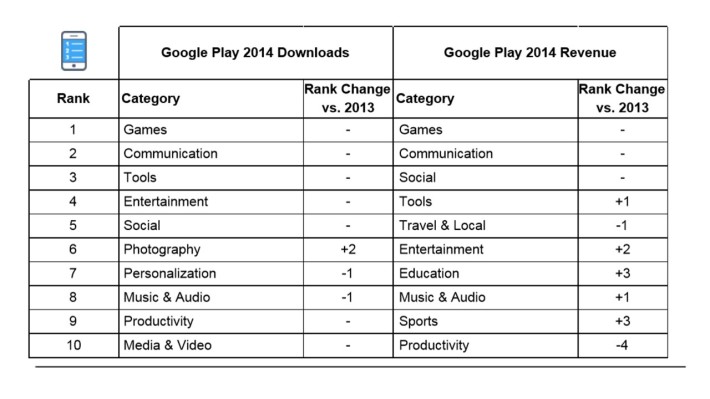 The takeaway:
There are no surprises here folks. Games and Communication (messaging apps) continue to rock the standings. Sports and Education saw good boosts in ranking but otherwise these lists are more or less the same as they were in 2013. Aside from some placement shuffling, this should also pretty much be the list in 2015 as well.