Apple saw an increase in its U.S. PC shipments during the recent holiday quarter, according to PC shipping estimates from Gartner. Apple shipped over 2.1 million Macs in 4Q14, up from 1.9 million Macs in 4Q13, marking an 11.5 percent increase. Though the company’s shipments were up, its growth rate slightly trailed the overall market, resulting in a share of 11.7 percent down from 11.9 percent in the year ago quarter. 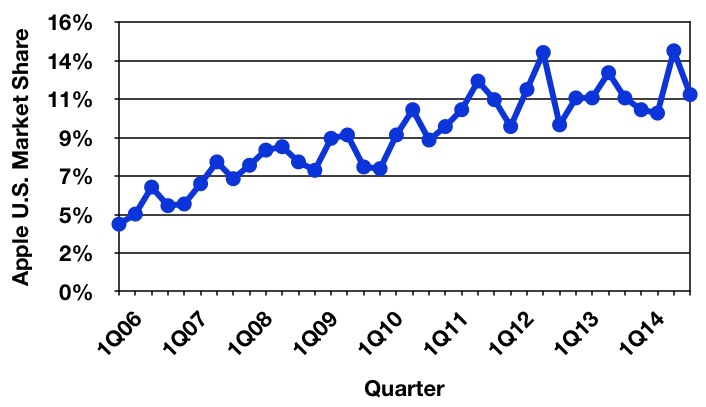 Apple’s U.S. Market Share Trend: 1Q06-4Q14 (Gartner)
IDC has also released its own estimates of Apple’s U.S. PC shipments during the holiday quarter, which are quite different from Gartner’s estimates. According to IDC, overall U.S. PC shipments totaled 17.6 million, with Apple responsible for 2.2 million of those with a growth rate of 18.1 percent.

In IDC’s estimations, Apple’s share of the market grew from 11.3 percent in Q413 to 12.7 percent in Q414, rather than declining slightly as in Gartner’s estimate.

It is important to note that data from Gartner and IDC is preliminary and that the numbers can shift. Last year, for example, Gartner predicted shipments of 2.2 million for Apple in Q4213, later revising that number to 1.9 million.