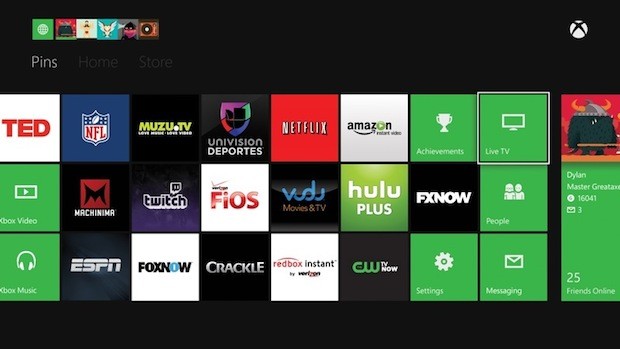 Long gone are the days when a game console merely had its launch lineup of games to worry about — in the modern era we also have to know about other types of entertainment. Microsoft is finally ready to reveal the “first wave” of apps that will arrive with its $500 Xbox One in each of the 13 launch markets and it’s a surprisingly healthy list. In the US we’re not seeing any services that weren’t already on Xbox 360, but internet video standards like Netflix, Amazon Instant Video, Hulu Plus, HBO Go (not at launch), Vudu, Crackle and Redbox Instant are all present and accounted for along with TV everywhere efforts from Fox, CW, ESPN and Univision. International audiences can expect to see locally available services like Netflix, Lovefilm, Orange and Canal+, where applicable (check the official blog for a full list).

While there are no apps for Time Warner Cable, Comcast, or AT&T’s U-verse at launch, Verizon FiOS is present and accounted for as a traditional pay-TV provider in the US. The most notable missing app award would have to go to YouTube or BBC iPlayer (both are also absent from the PS4 apps list), although the console’s integrated browser could help with that.

This bundle will make you safer in 2021 and includes VPN, cloud storage, password manager, and more

It’s a new year and for many people that means it’s time to start fresh with a resolution or two. What do you have in mind for 2021? Do you resolve to be smarter and safer in the coming year?If you work from home or spend a lot of time online, you’ll want to make sure that you’re covering all of your bases. That means not just private and secure browsing, but better management of passwords and data, too.The Internet Privacy & Security Lifetime Subscription Bundle, just $89 in the AG Deals Store right now, is your five-part peace of mind kit. It provides users with safe encrypted browsing, 500GB of cloud storage, a terrific password management tool, ad blocker, and more. Valued at roughly $1,700 if you were to purchase the various pieces on your own, you can get it for a fraction of the price.Ivacy VPN: Lifetime Subscription: Give Yourself Complete Online Protection Without Slowing Your Browsing DownPassword Boss Premium: Lifetime Subscription: Total Organization, Total Security: One Master Password to Rule Them AllThunderDrive Personal Plan: Lifetime Subscription: Safely & Easily Manage Your Files with a Cloud Service That’s 6x Faster Than Amazon StorageAdGuard: Lifetime Subscription: Get Rid of Annoying, Intrusive Ads and Protect Your Device from Malware with This Advanced Ad Blocking AppTimelinr Personal Plan: Lifetime Subscription: Rapid Road Maps & Smart Timelines Make for the Ultimate Collaboration ToolGet Started Today!You can pick up your own Internet Privacy & Security Lifetime Subscription Bundle for just $89 from the AG Deals Store today. It will be yours not just through 2021 but for as long as you want – it’s lifetime access for all five components!Best SellersEarn Credits!For every $25 you spend in the AG Deals Store you get $1 credit added to your account. And, if you refer the deal via social media or an email that results in a purchase, you’ll earn $10 credit in your account.First Time Buying?If this is your first time buying, you are also eligible for 10% discount! Just be sure to subscribe for email updates.Free StuffNot looking to spend any money today? No worries. You can still visit the AndroidGuys section for freebies and pick something anyhow.
Read more

Last week Oukitel released a video of the factory where its latest handset, the rugged WP10 5G is being mass-produced. This week, Oukitel is kicking off the new year with an announcement of a massive discount for the self-dubbed “King Battery” 5G rugged smartphone.The most affordable 5G rugged phone is set to make its 2021 debut on Aliexpress with a 40% discount.Available immediately, the WP10 5G is listed on Aliexpress with a price-tag of $399.99, a 40% discount from its original price of $669.99. As if that is not enough, buyers can get another $20 discount by using the promo code OUKIWP10 at checkout. It doesn’t get better than this.Still wondering if it’s worth it? Here’s a summary of the main features for the phone.Operating System: Android 10Battery: 8000mAhDisplay: 6.67-inch Immersive Corning Gorilla Glass FHD+ displayResolution & Aspect ratio: 1080 x 2400 pixels with an aspect ratio of 19.5:9Chipset: MediaTek Dimensity 800RAM & ROM: 8GB & 128GBRear Camera: 48MP SONY IMX582 AI camera, 13MP Wide-Angle camera, 2MP Depth camera & 2MP Macro cameraFront Camera: 16MP AI Selfie cameraNetwork Access: 5G/4G/3G/2GStill not convinced? Consider the following features are also included!Support for NFCSupports glove modeDark screen gesturesUnderwater camera modeAbility to record 4k at 30fpsSupport for 18W fast chargeCustomizable buttonAccording to several global surveys conducted by respected institutions, the three main things buyers look for in a smartphone are big battery capacity, quality display, and affordability. The Oukitel WP10 5G embodies all of these features, plus more. We’re talking 5G network access, massive internal storage, high processing power, and a professional level camera system. All of this makes the WP10 5G a good bargain, especially for its price tag.WP10 5G is a modular phone which means the WP10 rugged phone has a multi-module support system. This extends the possibilities of WP10, making its usage and capabilities nearly limitless. A previous modular phone model from Oukitel, for instance, came with a UVC Sterilizer and a flashlight module. We can expect similar modules for the WP10 5G, too.Hurry!All good things must come to an end and this deal is no exception. This amazing discount promo is set to end on the 7th of January, just a few short days from now. Interested buyers can add to cart on Aliexpress and order today!EDITORIAL ADVISEMENT: When considering an unlocked smartphone, ensure that it is fully compatible with your wireless service provider.EDITOR NOTE: This is a promoted post and should not be viewed as an editorial endorsement.
Read more

Today, Qualcomm announced their Snapdragon 480 chipset, bringing 5G to ultra-budget handsets in addition to other premium features.ConnectivityThe Qualcomm Snapdragon 480 features 5G connectivity, both sub-6GHz and mmWave 5G.The Snapdragon 480 also features a variety of networking technologies, in addition to Qualcomm’s FastConnect 6200 system, which supports dual WiFi-6 antennas, Bluetooth 5.1, and Qualcomm aptX Adaptive audio, among other things.AIThe chipset features a Hexagon 686 DSP and a Sensing Hub to improve AI performance over 70% over the Snapdragon 460 by allowing for ultra low-power always-on AI processing.CameraOne notable feature of the Snapdragon 480 is the triple Spectra 345 ISP, which can capture photos from three 13MP cameras at once or three 720p video streams.It can also support up to a 64MP still shot from a single camera.Other FeaturesThe Snapdragon 480 features Qualcomm Quick Charge 4+, support for Full HD resolution at up to 120Hz refresh rate, and support for both UFS chips and LP4x RAM.There is no information on when the chipset will be available, though it is known that HMD Global, OPPO, and Vivo will be manufacturing phones with this chipset. We can expect that these devices will be around $125-$250.
Read more

Last year, POCO was officially spun off by Xiaomi into an independent brand, though this is a brand independence, with POCO still using MIUI as well as Xiaomi supply chains. Now, in a video tweeted by POCO recapping 2020, you can see the text “F2” flashing intermittently, hinting at the launch of the POCO F2.The stage is set! The fun has begun! Let us get ready to take it to the next level!Excited? You should be, coz the next year is going to be even crazier.While we enjoy, let us look back at everything we’ve achieved together! Thank you pic.twitter.com/K0432jSj8B— POCO India (@IndiaPOCO) December 31, 2020While not much is known about the F2, discussions suggest that the device will be a mid-range smartphone featuring a Snapdragon 732G, a quad-camera setup and a 4,250mAh battery.
Read more