Google really wants all of the content users of its various services upload and create to use their real name and offer their photograph. Not too long ago Google updated YouTube giving people who upload videos the opportunity to use their Google+ name and profile photo rather than whatever random name they chose when they register for YouTube. Google is now rolling out that more personalized name and photo service to Google Play. 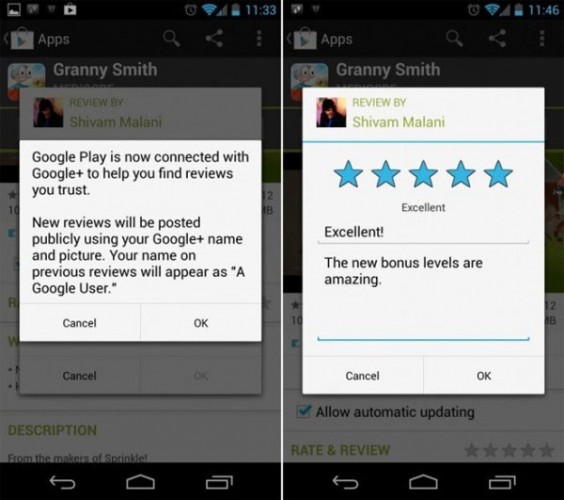 Google is now placing your real name, or at least the name used when you signed up for Google+, and your profile photo for each review you post on the Google Play store. You have to think that this change is at least in part a way to help prevent users from badmouthing apps because they could do so anonymously in the past. The move should also make it easier for other people reading the reviews to trust what people are saying since they can see your photo and know your real name.

The change applies to both web-based and mobile reviews on the Google Play store. If you haven’t made a review on Google Play since this change went into effect, you will be greeted with a message that reads, “From now on, reviews you write will be posted publicly using your Google+ name and picture.”

It seems that using your real name and a picture from your Google+ profile isn’t optional. If you’re the sort that prefers anonymity online, this may not sit well with you. However, I think most honest and rational people won’t have a problem with this change.