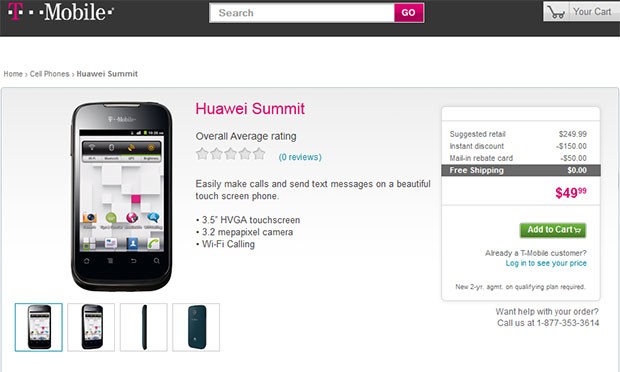 A recent leaked T-Mobile roadmap showed a Huawei Summit handset that we suspected was “possibly Android-flavored,” and now that the device has arrived in the carrier’s shop, we’re still not certain. It’s a basic phone, to be sure, with a 3.5-inch 480 x 320 display, 3.2-megapixel rear camera, GPS, Swype keyboard, WiFi, Bluetooth and HSPA+ network support. What’s not clear is the OS, which T-Mob cryptically lists as “proprietary,” but appears to at least have Android underpinnings, judging by the phone’s manual (and the fact that it’s rocking Swype). Hopefully, that won’t incur the wrath of Mountain View, but if you need a basic $50 phone and don’t care about Android-this or Open Handset Alliance-that, check the source.