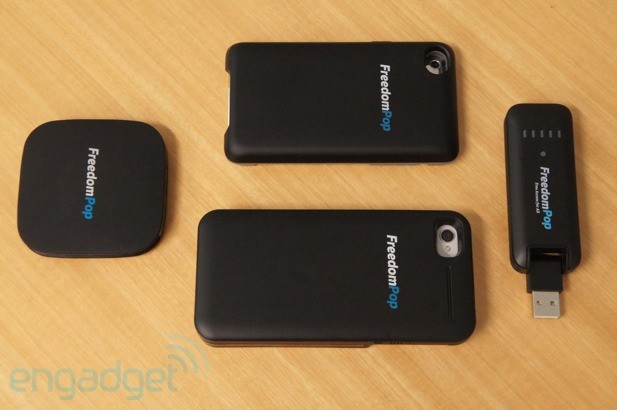 It was almost a year ago that we first heard about FreedomPop, a startup built on the manifesto that every American (yes, you) should have access to free wireless broadband. Ten months later, the pay-as-you-go service is launching in beta, with “free” meaning 500MB of data per month. For the time being, the touted 4G service will come courtesy of Clearwire’s WiMAX network, but FreedomPop says it will switch to Sprint’s LTE spectrum sometime in early 2013. In the meantime, though, you can expect speeds anywhere between 4 and 10 Mbps down, and 1 to 2 Mbps up.

To take advantage of the service, you’ll need to either buy or rent some compatible hardware. Your options include the “Freedom Spot” hotspot capable of serving eight devices simultaneously, or the “Freedom Stick,” a USB dongle. Both of these are free, but require that you put down a refundable deposit ($89 for the hotspot and $49 for the stick). As we previously reported, too, the company will be selling $99 iPhone and iPod cases that double as hotspots, though these won’t actually be available for another four to six weeks. The iPhone version, in particular, does triple-duty as a charging case.

If you do venture past that 500MB data cap you’ll pay $10 for every subsequent gigabyte. Packaged deals will also be available. As we had heard, though, FreedomPop is hoping to recoup the costs of that free data by selling premium services, with three to start and more coming later. At launch, these add-ons will include device protection (24/7 customer service and replacement service within 48 hours) and notification alerts if you’re about to hit the data cap. You can also pay for speedier 4G, though the company’s claim of “up to 50 percent faster” performance is a vague one, given that the range of possible speeds is so broad to begin with.

There’s one last piece about how FreedomPop works, and it might help if we drew a comparison to Dropbox, or Zynga, even. As you would in Farmville, you can earn extra Farmville cash free data by following through on certain tasks. Watch a 20-second ad, for instance, and you win three megs of data. Sign up for a Netflix trial and you get 1.2GB added to your coffer. And, similar to Dropbox, if you recommend a friend, you get 10MB for every month that pal stays on with the service. Finally, you can share data with a friend, but it really does have to be a friend: that person’s email address has to be in your contact list.

FreedomPop’s pay-as-you-go data service launches in beta, offering 500MB of free WiMAX per month originally appeared on Engadget on Mon, 01 Oct 2012 01:00:00 EDT. Please see our terms for use of feeds.