It’s like something out a strange science fiction movie: a giant asteroid careening towards earth is diverted using a massive blast of paintballs fired into space, saving mankind and forever giving paintball-lovers bragging rights over airsoft fans. As odd as it sounds, this very proposal earned Sung Wook Paek, Department of Aeronautics and Astronauts at MIT, the 2012 Move an Asteroid Technical Paper Competition. And yes, there’s a video. 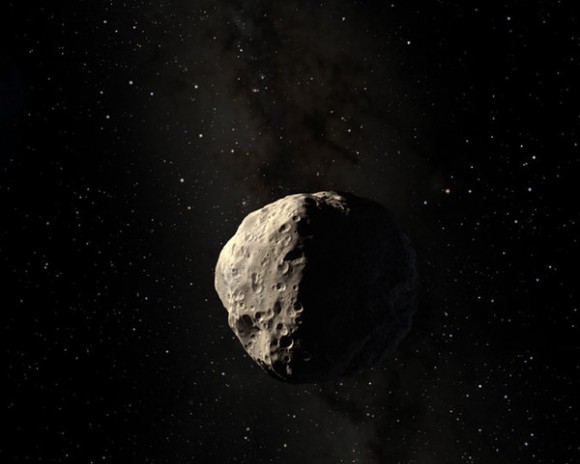 The competition was sponsored by the United Nations’ Space Generation Advisory Council. Paek presented his strategy at the International Astronautical Congress in Italy, where he detailed how firing a mass quantity of paintballs into an asteroid could prevent what would otherwise be an unfortunate collision with our fragile planet. It’s as simple sounding as it is seemingly ingenious; the light-colored paintballs, upon impact, would cause a slight diversion in the asteroid’s course. At this point, the chunk of space rock would then be coated in a reflective substance. The sunlight bouncing off the reflective surface would increase solar radiation pressure and further alter the asteroid’s course, redirecting it out of the danger zone.

This method was detailed in a video using the 900-foot-wide asteroid Apophis as the virtual test subject due to its potential impact with earth in the future. Just how many paintballs would it take to potentially knock the massive asteroid off course? Five tons’ worth. And sadly, while it’s fun to imagine the asteroid careening off-course immediately after a blast of pellets, it would take about two decades for the solar radiation pressure to shove the rock out of its dangerous trajectory. You can check out a video of this in action here.

According to Paek, additional things could be launched into space in addition to the paint pellets, such as pellets with aerosols that would “impart air drag on the incoming asteroid to slow it down. Or, you could just paint the asteroid so you can track it more easily with telescopes on Earth. So there are other uses for this method.” Last year’s winning strategy revolved around the idea of diverting an asteroid via a blast of solid pellets.