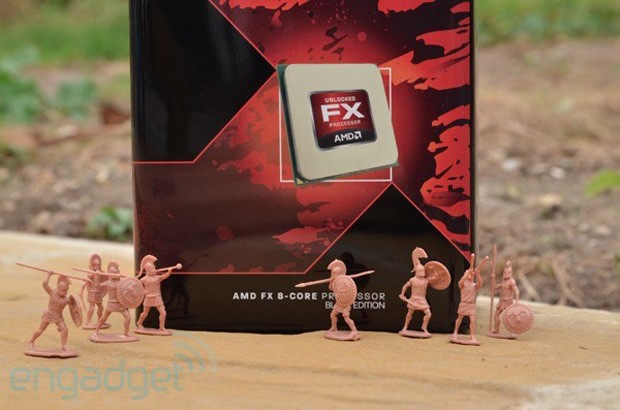 If you get the impression that AMD is diverting its energy away from traditional CPUs and towards APUs and fresher PC form factors such as all-in-ones, then you’re certainly right — but you’re also slightly ahead of the game. The company promises there’s a still a good few years of life left in its CPU-only chips and the AM3+ socket, and it’s putting today’s announcement forward as evidence. As of now, last year’s eight-core FX-8150 has been superseded on retailers’ shelves by the FX-8350, which notches the stock clock speed up to 4GHz, or 4.2GHz on turbo (alas with no obvious sign of that resonant mesh we once heard about). The full stack (codenamed ‘Vishera’) includes eight-, six- and four-core options, all based on the new Piledriver architecture which — when combined with these higher clock speeds — promises an overall performance uplift of around 15 percent versus the old Bulldozer cores. To be fair though, those Bulldozers weren’t so snappy to begin with, and besides, the most significant performance claims with this upgrade relate to multi-threaded applications and a few gaming titles like Skyrim and Civ 5. Judging from the slide deck below, gains in other areas of performance may be lower — perhaps in the region of seven percent — so as usual we’re going to roundup a bunch of reviews later today before we jump to any conclusions.

If it turns out that stock performance alone isn’t enough to sell these chips, then potential buyers still ought to check out FX’s pricing relative to Intel — not least because, as is typical, AMD sells overclockable chips at no extra charge. The top-end FX-8350 will hit the market at $195, which is not only cheaper than some earlier leaks suggested, but also $40 cheaper than an unlocked Core i5-3570K that has a lower clock speed and a smaller L3 cache — although the relative performance of these two chips remains to be independently tested. Meanwhile, the entry-level quad-core FX-4300 will virtually match the price of a locked i3-2120 at $122, but can be readily overclocked to 5GHz with water-cooling. AMD is also making a few claims based on the cost of multiple components in a rig: for example, that you can spend $372 on an FX-8350 and Radeon HD 7850 combo that delivers a 25 to 70 percent gaming advantage over a similarly priced Core i5 3570K with a GeForce GTX 650 Ti. Again, stay tuned for our roundup and we’ll figure out just how compelling this really is.