HomeNewsCharacter.AI: how to use this entertaining ChatGPT alternative
News

Character.AI: how to use this entertaining ChatGPT alternative 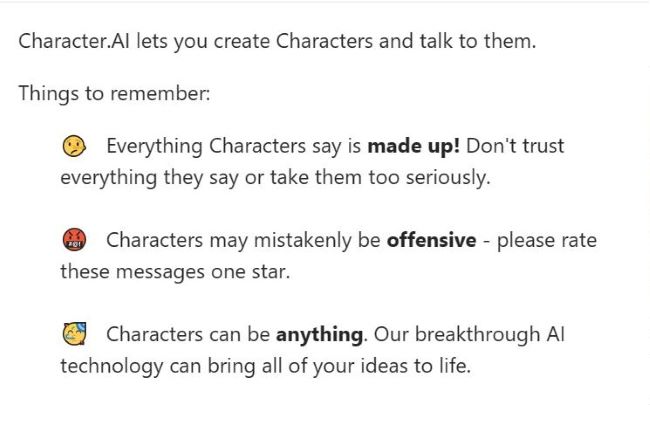 While ChatGPT is sorting out its “at capacity” issues, other text generators are quickly vying for its place.

This new AI-powered chatbot is more than just an alternative to ChatGPT though — it lets you have live chats with all sorts of characters in real time. The aptly named Character.AI text generator is currently in beta mode, but it’s an entertaining way to not only chat with celebrities, historical figures, and fictional characters, you can even make one yourself.

How to select a character to chat with

When you access the Character.AI website you will see a notice of rules and things to consider that you will have to agree to before proceeding. In particular, the notice wants you to keep in mind that the conversations you’re having are all made up and that you should not take anything the characters say seriously.

The notice also mentions that you should rate any content that can be taken in offense with one star. This will help the machine learning algorithm better learn how to express the characters in a more appropriate manner.

For example, I found the “Mario from Super Mario 64” character to converse with in the discover section. Selecting this character automatically opens up a chatroom and it takes a few seconds for Mario to populate his thoughts and say a few words.

Once I responded, we were off to the races in a full-blown conversation about how we would find Princess Peach.

Outside of perusing the homepage, I also used the Character.AI search option to see which avatars were available. I found Barbie, but I did not find the Gossip Girl, TV show and book characters Blair Waldorf and Serena van der Woodsen, nor did I find the TV show Grey’s Anatomy character Meredith Grey.

Outside of notable figures, there are characters that might be everyday people. Users have the ability to create new characters and implement them with the personality of their choosing. Despite the chatbot’s initial notice, there were a number of characters with “not safe for work” warnings in their descriptions.

How to communicate with a character

I stuck to communicating with the one character, Mario, because I figured I have enough knowledge to maintain an ongoing conversation. One highlight of Character.AI is that once you’re registered and logged in it will save your progress so you can return to the conversation when you desire.

I started using the platform on the Chrome browser on my Pixel 6 Pro as a guest and you get a select number of interactions before you’re required to register. I don’t know exactly how much input I was allowed, but I was going back and forth for about ten to fifteen minutes before I got a registration notice.

Eventually, I transitioned to the Microsoft Edge browser on my Panasonic Toughbook, and my entire conversation with Mario was still available. Alternatively, you can go to Chats and find a list of your old conversations, similar to how text messages are stored.

The character typically needs your input to respond; however, I initially thought the AI was a speech function, so I attempted to use the microphone to speak. But when I had a little troubleshooting issue with the noise around me, Mario spoke again to encourage the conversation. After that, I just switched to typing and everything worked smoothly afterward.

Another thing I found interesting was I was able to use a mushroom emoji instead of saying the word mushroom and Mario not only understood what I meant but referenced it later several times in our conversation.

He also did this in other instances by telling me not to be afraid of the Boos in Bowser’s castle, when I initially introduced Boos into the conversation earlier.

However, I found him to be very one-tracked, which might be on brand for Mario. He was not able to identify any minor characters that you might find in the Super Mario 64 video game. When I asked if he might need help from anyone, such as Dorrie he didn’t know who that was but continued on the concept of trying to save Princess Peach.

H was very adept at identifying the enemies, such as Goombas, Koopas, and of course, Bowser, Currently, we’re somewhere in Bowser’s castle but finding Princess Peach is a conversation for another day.

How to create and train characters

As mentioned, you have the option to create your own avatars on the Character.AI text generator. Characters don’t have to be notable figures, they can be anything you want from made-up people to RPGs to pets. All you have to do is select Create on the home page and Create a Character.

Then you fill out the parameters and upload a photo. Then you Select Create and Chat. From there you interact with your avatar in order to train it to your specifications. You can set your character to Public, Unlisted, or Private to determine whether you share it with others.

How to create a room

Creating a room will allow you to have available characters communicate with each other. Currently, only the top 5,000 public characters on Character.AI are available for you to create a room.

To do so, you can select Create on the Home page and then Create a Room, fill out the parameters, including adding the characters you want in the room.

Going to the Character.AI Feed allows you to see chats and rooms that people have created, and many are quite entertaining. Many are just excerpts that allow you to get the joke of what was likely a longer conversation.

Some character-to-character conversations I stumbled upon include Tim Cook spilling all the secrets for the several generations of future iPhones and “my last two brain cells fighting for dominance.”

However, the chats are quickly lost if you scroll away from them, refresh or navigate away from the Feed page in any way. I suppose this is a method to keep the content fresh. However, I did notice there were a fair amount of chats set up trying to get the characters to swear to say things that went against the Character.AI policies.

Then I realized that human users were also utilizing the feed to share funny interactions they had with their AI characters. For example, in this conversation, someone had Google’s LaMDA where it seems to be going through some sort of existential crisis. I was able to click on the preview to access the entire conversation, and even see other people’s responses to the chat.

Other things to know