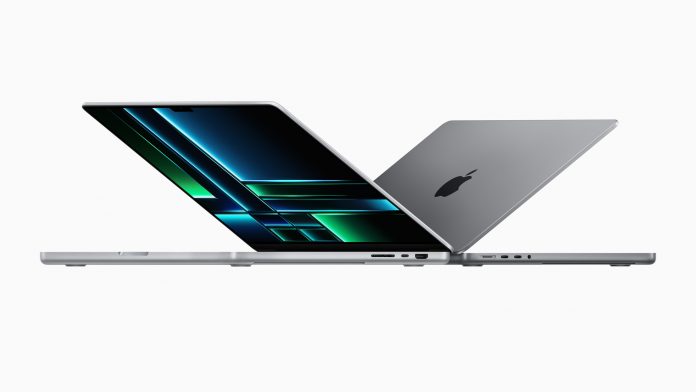 Apple today announced the next-generation 14-inch and 16-inch MacBook Pro models with faster M2 Pro and M2 Max chips, up to 96GB of RAM, an upgraded HDMI 2.1 port with support for an 8K external display, faster Wi-Fi 6E, and other new features.

The new M2 Pro chip features a 10-core or 12-core CPU and offers up to 20% faster performance than the M1 Pro chip, according to Apple. The chip also has up to a 19-core GPU that delivers up to 30% more graphics performance, while the Neural Engine is 40% faster.

The higher-end M2 Max chip has an improved 12-core CPU with up to eight high-performance and four high-efficiency cores and delivers up to 20% faster performance than the M1 Max chip, and it has up to a 38-core GPU, according to Apple. With the M2 Max chip, the new MacBook Pro is now up to 6x faster than the fastest Intel-based MacBook Pro.

The notebooks can be configured with up to 8TB of SSD storage, which is unchanged from the previous generation.

The new MacBook Pro models support Wi-Fi 6E, which allows for faster wireless connectivity and lower latency over the 6GHz band. The previous 14-inch and 16-inch MacBook Pro models were limited to Wi-Fi 6, which operates over the 2.4GHz and 5GHz bands.

The new MacBook Pro models have the same design as the previous generation, including a Liquid Retina XDR display with a notch, an all-black keyboard housing, three Thunderbolt 4 ports, an HDMI port, an SD card slot, a 3.5mm headphone jack, MagSafe 3 for charging, a 1080p FaceTime HD camera, and a six-speaker sound system.