HomeNewsThe most innovative smartphones of 2022
News

The most innovative smartphones of 2022 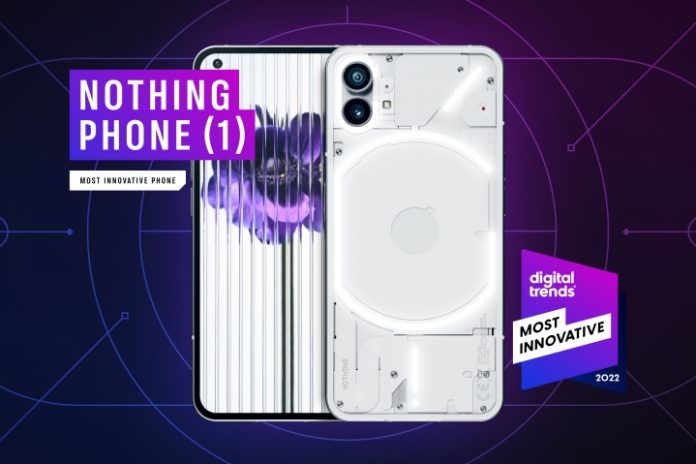 There were many great smartphones released during 2022, with most being the best of their respective model lines we’ve seen yet — adding more power, better cameras, and the latest software. But how many did something new or unexpected? We had a good look at all those released and finally whittled it down to three notable new phones, which both surprised and delighted us over the past year.

It can be difficult for a new smartphone to include features that make us smile or look twice these days, something that’s especially hard for a brand-new company trying to capture our attention. Nothing, the technology brand founded by OnePlus co-founder Carl Pei, managed to do exactly this with the Nothing Phone 1.

On the surface, the phone is much like any other — it has a screen with a high refresh rate, cameras on the back, Android installed inside, and a design that’s not a million miles away from the iPhone. But to concentrate only on this is to deliberately ignore what makes the Nothing Phone 1 special. The flashing lights on the back really do serve a purpose in addition to looking cool, there aren’t any superfluous 2MP macro cameras, and the software is a wonderfully clean version of Android.

The Nothing Phone 1’s Glyph interface is wild, but the rest of the phone is sensibly restrained, and that makes it brilliant. There’s no silly macro camera (just two good cameras), no fancy-but-pointless skin over Android, and a very reasonable price. The lights mean that, despite the iPhone-like looks, you can’t mistake the Nothing Phone 1 for anything else; the transparent back means it fits in perfectly with Nothing’s unique design language, also seen on the Ear 1 and Ear Stick earbuds.

It does something different from any other phone. It’s really great to use on a daily basis, it’s fun to look at, and it’s Nothing’s first phone. There are brands that don’t tick those boxes even when it’s their 10th release! We’re very keen to see how Nothing follows the Phone 1 up in the future.

The rumors made us think we knew everything about the iPhone 14 Pro ahead of release, but when it was revealed on stage, Apple surprised everyone with the announcement of the Dynamic Island. Instead of just giving the new phone a different notch design, Apple changed it into an exciting blend of both hardware and software — creating a new way to interact with your phone.

With it, you can control music playback, check navigation using Maps, interact with timers, or manage calls at the moment. It’s helpful, intuitive, and well-designed. But its potential hasn’t been fully realized yet, as we wait for developers to really embrace the system. It separates the iPhone 14 Pro models from the non-Pro versions, and there are already hints we may see something similar on an Android phone in the future. The Dynamic Island is Apple showing it still knows how to come up with an expected feature we look at and think, “I can’t wait to see where this goes.”

Like Nothing, Asus is a small fish in a big pond. While it’s best known for the excellent ROG Phone 6 Pro, it also came out with another phone this year — the Asus Zenfone 9. It gets an honorable mention for doing something different and filling a gap that not only exists in the market, but one many often ask to be filled.

The Zenfone 9 is a compact flagship smartphone, coming in at a similar size to the Galaxy S22 and the Google Pixel 5, but with a Qualcomm Snapdragon 8+ Gen 1 processor and up to 16GB of RAM inside. That’s serious power, and all in a phone with a 5.9-inch screen. Not everything about the Zenfone 9 is a success, but at least Asus had the guts to go in a different direction from everyone else.