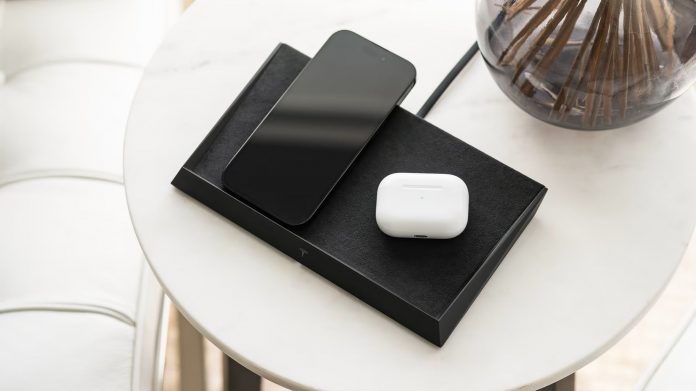 Tesla today announced the launch of the Tesla Wireless Charging Platform, a $300 wireless charger that is able to charge up to three Qi devices at one time.

The concept is somewhat similar to the AirPower that Apple wanted to produce as the three devices can be placed anywhere on the Tesla charging mat, receiving up to 15W of power each.

Tesla says that the angular design of the charging mat was inspired by the look of the Cybertruck, and it features an aluminum housing with an alcantara surface and detachable magnetic stand that can be used for charging flat or at an angle.

Inspired by the angular design and metallic styling of Cybertruck, our Wireless Charging Platform provides 15W of fast charging power per device for up to three devices simultaneously. Its sleek design is composed of an aluminum housing, premium alcantara surface and a detachable magnetic stand that allows you to lay the charger flat or at an angle for better viewing. Featuring FreePower(R) technology, which charges your Qi capable devices such as phones or earbuds placed anywhere on its surface without precise alignment.

Apple in September 2017 announced the AirPower, a multi-device charger designed to charge the iPhone, Apple Watch, and AirPods all at once. Apple wanted users to be able to place their devices anywhere on the ‌AirPower‌ to charge, but the overlapping wireless coils required were problematic, with Apple seeing heat management and interference issues that prevented the product from being viable. While the ‌AirPower‌ was meant to launch in 2018, it never appeared, and Apple confirmed its cancelation in 2019.

While Tesla’s concept is similar to what Apple hoped to achieve with the ‌AirPower‌, it is limited to Qi-based devices like the ‌iPhone‌ and the AirPods and it does not charge the Apple Watch.Tags: Tesla, AirPower
This article, “Tesla Launches $300 AirPower-Like Wireless Charger That Can Power Three Qi Devices at Once” first appeared on MacRumors.com