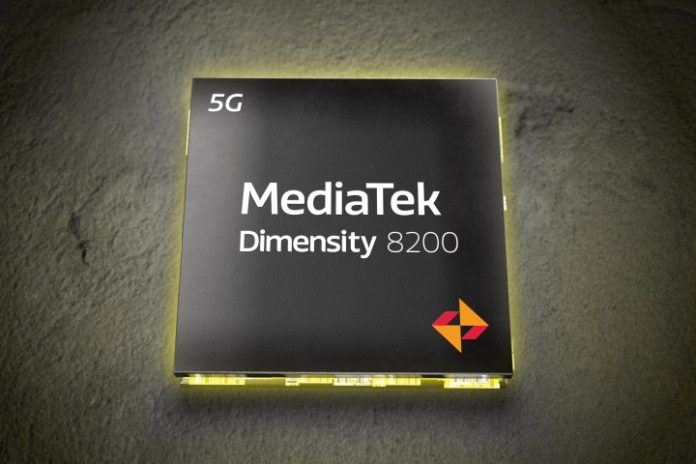 MediaTek is adding a new sub-flagship mobile processor to its lineup, and this one comes up with some “core” upgrades. Say hello to the Dimensity 8200, which succeeds the Dimensity 8100 system on chip (SoC), and will soon be appearing inside a bunch of smartphones made by Chinese brands. It will go against the likes of Qualcomm’s Snapdragon 7 Gen 1 SoC.

The latest offering from MediaTek wades right into the flagship territory by opting for TSMC’s 4nm process. Apple also had its mighty A16 Bionic (powering the iPhone 14 Pro) fabricated on the same 4nm tech. For comparison, the MediaTek 8100 is based on TSMC’s 5nm process.

The other key change is to the core architecture. The Dimensity 8100 offered a dual-cluster design that included four Cortex-A78 cores and an equal number of Cortex-A55 cores. The Dimensity 8200 is embracing a tri-cluster design, much like the top-tier Dimensity 9200 mobile processor and Qualcomm’s own flagships.

You get a single Cortex-A78 core buzzing at 3.1GHz alongside three slightly slower Cortex-A78 cores running at 3.0GHz. For less demanding tasks, there are four Cortex-A55 cores clocked at 2.0GHz. The GPU remains unchanged, but MediaTek is adding a bit of extra grunt to the ARM Mali-G610 graphics engine by pairing it with next-gen HyperEngine 6.0 optimization tools.

MediaTek has also armed the Dimensity 8200 with the new Imagiq 785 chip to handle its camera capabilities, which allows 4K HDR video capture. The previous-gen Imagiq 780 ISP only offered support for 200-megapixel image capture, but its successor can go up to 320 million pixels worth of imaging data.

The company is also claiming “exceptionally fast AI-noise reduction” to deliver more detailed photos. MediaTek’s fresh silicon can drive Full HD+ panels with up to a 180Hz refresh rate, which is a slight upgrade over the 168Hz figures touted by the Dimensity 8100. Support for 4K AV1 video decoding is also part of the package.

The wireless connectivity suite includes Wi-Fi 6E, 5G, and Bluetooth 5.3, competing with the in-house hybrid coexistence technologies to reduce latency and boost raw speeds. The first smartphones powered by Dimensity 8200 will arrive in December, but it is unlikely that any of those will be making their way to the U.S. market.

The only hope is OnePlus and Motorola. OnePlus has finally warmed up to using MediaTek processors in its budget-centric Nord series phones, as has Motorola with some of its U.S. handsets.