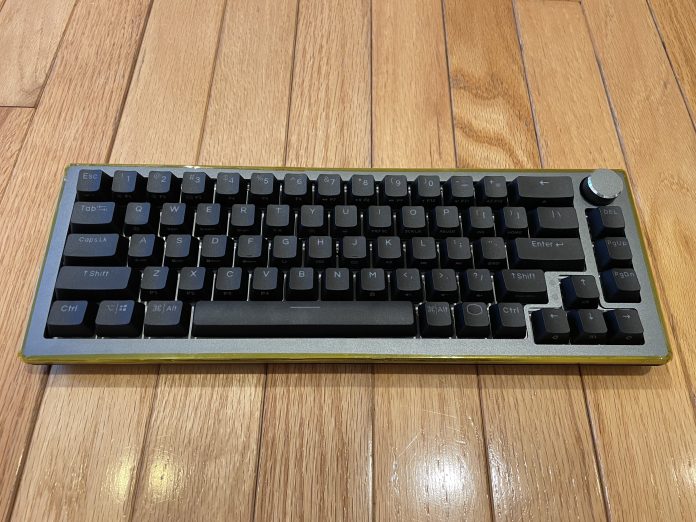 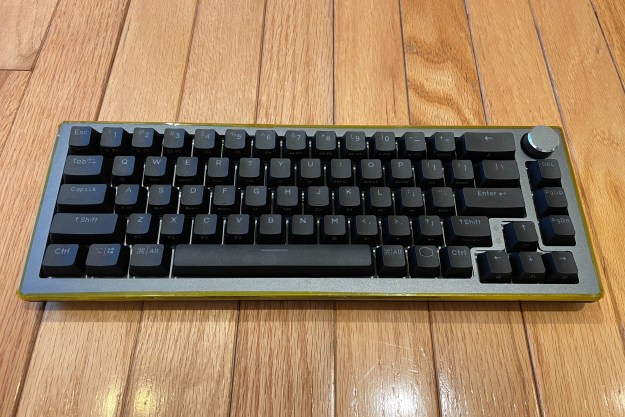 “For only $100, the Cooler Master CK720 is the best value for compact, customizable keyboards”

There are some who prefer keeping things simple when it comes to keyboards. They just prefer a no-frills, well-built keyboard that gets the job the done.

Then, there are those who want maximum customizability with the ability to make every part of the keyboard an expression of their creativity and personality. If the latter describes you, the Cooler Master CK720 is a mechanical keyboard that deserves serious consideration.

The CK720 is a 65% keyboard that is refreshingly compact, yet robust. It’s not necessarily a thin keyboard and weighs about 2 pounds so it’s kind of chunky. However, I think that lends to a certain quality that you can be sure will last quite a while.

Cooler Master expects users to fully customize this to their heart’s content, so there is a removable metal top plate to allow you to completely dissemble the keyboard if you wanted. Cooler Master says they will be selling other colors for the top plates if you don’t like the default one. There’s a lever on the side that allows you to pull it off and expose the mechanics below.

On the bottom are two-step kickstands to allow you to control the angle if you prefer your keyboards at an incline. The kickstands are adjustable from 5 degrees, 8 degrees, and 10 degrees.

Though this is only a wired keyboard, it at least comes with a USB Type-C to Type-A detachable cable. Cooler Master will also release a braided coiled cable also in different colors.

Despite being compact, it still has a few quality-of-life features such as a volume dial that can be customized for other functions (more on that in a bit). The Delete, Page Up, and Page Down keys are on the side, though it’s a shame Cooler Master couldn’t fit a dedicated Home key.

If you love keyboard shortcuts, this keyboard has plenty of them. Almost every key has some alternate function that you can access by holding down the function key (with Cooler Master’s logo) and hitting the respective key. Cooler Master calls it its “On-the-fly” system and also allows you to adjust setting such as backlighting and RGB lighting modes, and even record macros without having to use the Masterplus software.

The CK720 is a robust keyboard that saves a massive amount of space on your desk.

The CK720 is compatible with both Mac and PC and includes a dedicated key for switching between Windows and macOS layouts.

This a gaming keyboard so, of course, it has a hefty dose of per-key RGB lighting that’s customizable with different colors and effects like many of its competitors like Razer and Logitech.

Despite that, the CK720 is, overall, a robust keyboard that saves a massive amount of space on your desk.

The real star of the show is the sheer customization on tap. This is the reason you buy this keyboard. Not only can you replace every single keycap, you can also replace all of the switches. Whether you’re into Cherry, Gateron, or Boba switches, they’ll all work on the CK720. The CK720 comes with durable PBT double-shot keycaps, but you could easily switch it out for something from Drop or other keyboard manufacturers.

Complete customization is the reason you buy this keyboard.

Mechanical keyboards with hot-swappable switches are becoming more popular thanks to keyboards such as the Asus ROG Strix Flare II and the Corsair K70 Pro Mini.

The CK720 obviously comes with a tool that functions as both a key puller and switch puller. Like the Corsair K70 Pro Mini Wireless, any 3-pin MX-compatible switch will work in the CK720. One upside to using any keys/switches you want is that because the keyboard can switch between Mac and Windows layouts, you can buy Mac-specific keys.

Like the hardware, the Masterplus software also allows more customization for those who want to make the CK720 truly theirs. Unfortunately, at the time of this writing, Masterplus is only available on Windows. The Cooler Master rep told me that the team is working on new software that will be compatible with both Windows and Mac.

Masterplus allows you to customize all of the RGB lighting on a per-key basis and apply effects such as a rainbow wave or “crosshair.” Additionally, you can re-map any of the keys and create custom macros that you can save to profiles.

The rotary dial toggles the volume up and down and mutes if you press it in by default. However, Masterplus allows you to set it to other profiles that control media playback, brightness, and LED/lighting modes.

The CK720 comes with Kailh Box V2 switches. My review unit has the tactile versions though it comes with eight Cherry MX Green switches that feature heavy clicky action. As I’ve said in other reviews, I tend to prefer linear switches (especially for gaming), but I can be persuaded to use tactile switches if the performance is good enough.

I’ve complained about the sound that some keyboards make and Cooler Master apparently agrees with me. The CK720 has two separate silicone pads to dampen the sound and absorb the force of the keystrokes. Indeed, typing on the CK720 is pleasantly subdued and I could definitely see this being used in a quiet office environment.

Typing performance for the default brown switches is overall pretty good. I was able to type long stretches without any mistakes. The keyboard travel was just right for me and I didn’t find myself having to continuously readjust my hands.

As far as gaming performance, I likewise had no major issues. The CK720 has a 1000Hz polling rate and a 1ms response time. This allowed me to exercise quick reactions and movement in Modern Warfare II. The keyboard works natively with the Xbox Series X and PS5 for those console owners who prefer to use a keyboard and mice.

If you are a hardcore mechanical keyboard enthusiast and like to mod every single key cap and switch, this is the keyboard for you. At only $100, this is an outstanding value given the level of customization that’s available. Other keyboards offer the ability to switch out key switches, but not for $100.

Notice my initial caveat, however. If you simply want a simple keyboard that works and don’t plan on switching out the keycaps or switches, this may be overkill. You’ll find much cheaper mechanical keyboards that’ll get the job done.

That said, the overall performance of the CK720 is fantastic and could be something worth looking into if you want a compact keyboard, you just wouldn’t get the full value if you don’t actually customize it.

There are other options, of course, like the Corsair K70 Pro Mini Wireless that allows you to remain untethered to your computer. However, the Pro Mini Wireless is about $80 more expensive and since it’s a 60% keyboard, you miss out on some of the utility keys.

If you don’t mind a wired connection, however, the Cooler Master CK720 is hard to beat.

Facebook
Twitter
Pinterest
WhatsApp
Previous articleTop 4 Qualities To Look For In A High-Speed Internet Provider
Next articleApple Health vs. Samsung Health? What I learned after using both