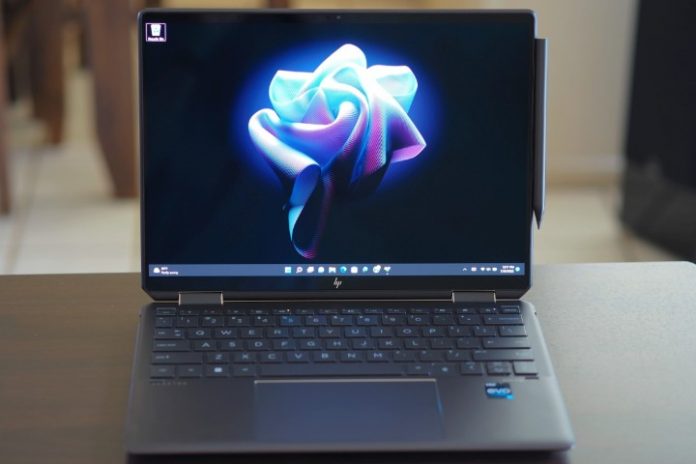 Apple’s MacBook Air M1 remains in the company’s lineup thanks to solid performance, excellent battery life, a quality build, and an attractive price for a premium laptop. But it faces some stiff competition, like the HP Spectre x360 13.5, that’s more expensive but also offers solid combinations of performance, battery life, and quality.

Both machines are on our list of the best laptops, for good reason. And the question is, should you spend more on the Spectre x360 13.5 or save your money with the MacBook Air M1?

The MacBook Air M1 is a standard clamshell laptop, with the same tapered design as the original. The newer MacBook Air M2 shakes up the machine’s chassis in a big way, but there’s nothing wrong with the older version. It’s incredibly well-built, elegant and minimalist, and it’s thin and light enough for highly portable use. The MacBook’s hinge is smoother than the Spectre’s more complicated version and just as good at holding the display firmly in place.

The Spectre x360 13.5 is a very different machine. It’s a 360-degree convertible 2-in-1, meaning it morphs between clamshell, tent, media, and tablet modes. It’s just as good a clamshell as the MacBook, but it’s a lot more flexible. The touch display supports an active pen, making it a good platform for digital inking that’s aided by the taller 3:2 display. The Spectre is also solidly built and sports a more elaborate “gem-cut” aesthetic in Natural Silver, Nightfall Black, and Nocturne Blue color schemes.

While the Spectre x360 13.5’s keyboard is excellent, with deep, snappy switches providing precise feedback, the MacBook Air M1 uses Apple’s superior Magic Keyboard. It’s shallower but provides an even more precise feel that’s consistent and quiet across the entire keyboard. The MacBook’s Force Touch touchpad is also better than the Spectre’s mechanical version, which is great for a Windows laptop.

Connectivity favors the HP, which has as many Thunderbolt 4 ports as the Apple and adds in a USB-A port for legacy devices and a microSD card reader. The Spectre also has faster wireless connectivity with Wi-Fi 6E and Bluetooth 5.2 compared to Wi-Fi 6 and Bluetooth 5.0.

Finally, the Spectre x360 13.5 enjoys a 5MP webcam with infrared camera supporting Windows 11 Hello passwordless login via facial recognition, to go with a fingerprint reader along the bottom row of the keyboard. The MacBook Air M1 makes do with a 720p webcam and the equally reliable Touch ID power button.

When running in its performance mode, the Spectre x360 13.5 matches the MacBook Air M1 in CPU-intensive tasks, and both laptops can handle demanding productivity tasks. It’s likely that the MacBook will run GPU-intensive creative apps more quickly than the Spectre with its integrated Intel Iris Xe graphics, thanks to optimizations built into the M1 processor.

For most users, though, these are two equally matched laptops and can meet most portable performance needs. Neither will be a particularly good gaming laptop.

The MacBook Air M1 uses a 13.3-inch 16:10 Liquid Retina IPS display running at 2,560 x 1600, and it’s a good panel for productivity work. It’s plenty bright and has good contrast, but its colors aren’t quite wide enough for creators.

We reviewed the Spectre x360 13.5 with the optional 13.5-inch 3:2 3K2K (3,000 x 2,000) OLED display, and it’s spectacular. It’s sharper than the MacBook’s, and it’s just as bright. However, its colors are wide and incredibly accurate, and its contrast is deep providing inky blacks. HP also offers a WUXGA+ IPS and IPS privacy panels.

If you want the best performance in photo and video editing (display-wise, that is), along with excellent high dynamic range (HDR) quality, then the Spectre’s OLED panel wins out. Both are great for simple productivity work, though.

The Spectre x360 13.5 has four downward-firing speakers that pump out plenty of volume with clean mids and highs and a little bass. The MacBook Air M1 has two speakers that provide good sound as well, but the Spectre puts out more of it.

The MacBook Air M1 is slightly thinner than the Spectre x360 13.5 and it weighs a bit less. But both machines are small and light enough that they’re easy to carry around.

The biggest difference in portability, at least when the Spectre x360 13.5 is equipped with its higher-res OLED display, is in battery life. The MacBook Air M1 benefits from the extreme efficiency of Apple’s ARM architecture, and it gets better battery life. The difference wouldn’t be quite so great with the Spectre running a lower-res IPS panel, but the MacBook would still likely last longer.

The Spectre x360 13.5 provides more flexibility, at a price

The Spectre x360 13.5 is the more expensive laptop, and that buys you the flexibility of a 2-in-1 with a standout aesthetic. Performance is similar between the two machines, and the MacBook Air M1 enjoys a better keyboard and touchpad and superior battery life. The HP wins out in display quality and connectivity.

If you’re on a tight budget but want a premium laptop, the MacBook Air M1 is a great choice. But otherwise, the Spectre x360 13.5 deserves its higher price.