HomeNewsTesla just shocked everyone with its Optimus robot prototype
News 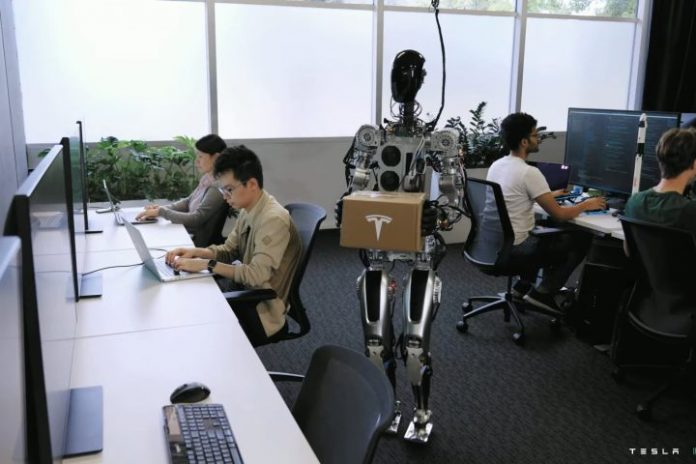 The Tesla AI Day 2022 event shocked everyone with a good look at the first Optimus robot prototype. While a preview had been shown of robotic hands forming a heart shape in the announcement of the event, the Tesla bot has been kept completely under wraps for over a year.

The Optimus prototype is in a humanoid form, as expected, and has roughly the same dimensions as a human. No one really knew what to expect from the Optimus prototype. but it was quite impressive given the short amount of time in development.

The Tesla Bot had the ability to walk around untethered, wave to the audience, and even did a little, somewhat conservative dance. In a video, Tesla showed that the Tesla bot can already pick up a box and deliver it to a desk where people are seated. It can identify and pick up other objects including a metal bar and a watering can that’s used for plants.

Tesla also showed a more refined-looking version of the Optimus robot with more flexibility and full control of every finger. This model wasn’t ready to walk yet, so it was mounted on a stand, but it moved all of its limbs to give a brief glimpse of its capabilities. Perhaps the most impressive claim is that the Tesla bot’s price could be under $20,000.

Tesla is a car company, and it has only had a year since Optimus was first announced to deliver a humanoid robot, which is an incredibly complex device. The Tesla bot has a head start on navigation since it uses the same vision-based technology as Tesla’s self-driving cars. But as Musk has said time and time again, the robotics program designed for Tesla’s factories already makes it one of the most advanced robotics companies in the world.

Boston Dynamics’ Atlas robot is admittedly more advanced, but that’s the result of several years of research that saw a progression through dog-like robots before attempting a two-legged robot that can dance and even perform a bit of parkour. However, it’s not intended for the average consumer — unlike Optimus.

Some had feared the Tesla Bot portion of the AI Day event would be all bluster, but the Optimus prototype demonstrates the work of a serious robotics team.

Tesla showed just how much work has been done toward manufacturing a compact, general-purpose robot that might be able to fill in for a human someday, changing the way work is done in Tesla factories — and beyond. From what we can tell in these early stages, there’s some exciting potential for Optimus as its development continues.