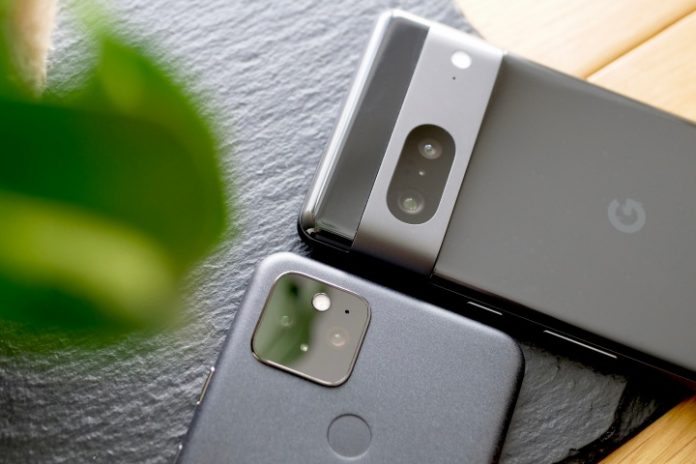 The Google Pixel 5 is, and remains, a great phone. But at this point, it’s coming up on being two years old, and the pull of a brand-new smartphone may be getting too hard to resist. The newly released Pixel 7 is the most obvious upgrade, and in terms of hardware and design, it’s a big step forward.

However, buying a Pixel phone means you like taking photos, so is the Pixel 7’s camera better than the Pixel 5’s? We took the two phones out over the course of several days to find out.

The Pixel 5’s camera array is made up of a 12.2-megapixel, f/1.7 aperture main camera with optical image stabilization (OIS), alongside a 16MP wide-angle camera with a 117-degree field of view and an f/2.2 aperture. On the front is a single 8MP fixed-focus selfie camera. As a reminder, the Pixel 5’s rear camera is so capable, we used it to take close-up photos of watches for a few reviews — and you’d never know the image wasn’t taken with a DSLR.

The Pixel 7’s camera array is different. It has a 50MP main camera with an f/1.85 aperture, OIS with electronic image stabilization (EIS), plus Google’s Super Res Zoom technology for zooming up to 8x. It’s joined by a 12MP wide-angle camera with a 114-degree field of view and an f/2.2 aperture. We’ve already put the Pixel 7 against the iPhone 14, and it beat the Apple phone in most of the categories, so we know it’s a strong performer. On the front is a 10MP fixed-focus selfie camera.

All the photos here were taken using the automatic settings, and we left the camera to focus by itself, apart from the Portrait mode shots where we tapped the screen to isolate the subject. Images were examined on a color-calibrated monitor but resized before uploading here for a friendlier online viewing experience. Now, let’s take a look at the photos.

If you’re expecting big differences between the two main cameras, perhaps based on the dramatically different megapixel count, then you’re going to be disappointed. The Google Pixel 5 and Pixel 7’s main cameras take very similar photos, with only subtle alterations between them, and it’s hard to single one out as being better than the other.

We’ll start with the photo of coffee and cake, as it does a good job of showing the main difference between the two cameras, with the Pixel 7 providing a greater natural depth of field. This is both a benefit — the bench is more attractively blurred in the Pixel 7’s photo — and a downside, as the Pixel 5 has better overall focus, where the Pixel 7 slightly blurs the cake while keeping the coffee in sharp focus.

This is also noticeable in the photo of the ruins, with the Pixel 7 adding a stronger depth of field to the surrounding stonework, and better isolating the ruins because of it. However, zoom in on the ruins and there’s little to choose between them. The stone perhaps has slightly more tone and texture, and the grass is a little greener in the Pixel 7’s photo, but I really like the Pixel 5’s blue sky. Both photos look fantastic.

Finally, if you had trouble seeing the differences before, they’re even harder to spot in the photo of the bridge. It illustrates how close the two main cameras are, with only tiny changes visible, and none of them making the photos of one better or worse than the other. The good thing is, both photos capture the scene perfectly, and I’d be very happy with either one of them. Again, it’s the stronger depth of field from the Pixel 7 that is most noticeable, but whether you think that’s worth upgrading for will be a matter of personal taste.

There are more differences between the wide-angle cameras, but despite the Pixel 5 having a greater megapixel count, it doesn’t always come out on top. It’s worth noting that Google has tightened the field of view even more on the Pixel 7 compared to the Pixel 5; if you thought the Pixel 5 didn’t emphasize a landscape view much, don’t expect improvements on the Pixel 7.

The differences in tone and light are more obvious in our second photo, where the Pixel 7’s stone and brick archway is far more natural-looking than the oddly green-tinted Pixel 5’s photo, as is the dirt and gravel on the ground. The Pixel 7’s HDR effect better captures the blue sky and green trees in the distance, too.

However, when you look at the wide-angle version of the bridge and river we showed in the main camera section, the differences are less obvious. To see the improvements in the wide-angle camera, it needs specific shooting environments — and under normal circumstances, the two will take practically identical images. Here, it comes down to which color blue you prefer, and it makes choosing a winner much harder. But it’s clear from the other two shots the Pixel 7 can take better wide-angle photos in some situations.

Neither camera has a dedicated telephoto, but the Pixel 7 uses Google’s new software-driven Super Res Zoom system, which is designed to improve digital zoom shots. The first was shot at 2x zoom, as this is provided as a shortcut in the camera apps and is likely the one that gets used most often. The second photo is at the maximum available zoom.

Google’s Super Res Zoom is supposed to improve greater digital zoom shots too, and the second image is shot at 8x on the Pixel 7 and 7x on the Pixel 5, as this is the maximum level allowed by the phone. The Pixel 7’s photo is clearer, has more detail, and less pixelization. It’s perhaps not a photo you’d want to share, but it’s much better than the Pixel 5’s attempt, and, again, looks far less obviously digital.

There are also improvements in the portrait mode, with the Pixel 7’s Tensor G2 chip and Google’s software enhancements providing better edge recognition and a greater degree of detail. Neither is perfect, as you can see in the image below, but it’s immediately obvious the Pixel 7’s photo is superior.

The lantern’s complex shape is better isolated in the Pixel 7’s photo, including the feet and surrounding ironwork. The depth of field isn’t quite as strong either, and it makes for a brighter, more appealing bokeh effect than the heavy-handed Pixel 5’s shot. Even if two years haven’t altered the main camera performance much, it has definitely made a difference here in portrait mode.

More clarity, less noise, and better color balance. This sums up how the Pixel’s Nightscape mode has been refined over the past couple of years. Google’s cameras have always been a leader in this class, but the Pixel 7’s night photography beats even the Pixel 5’s efforts. It’s obvious from behind the camera too, where the Pixel 7’s app was considerably quicker to capture these images than the Pixel 5.

The treatment of the sky in the first picture is very similar, but elsewhere, the Pixel 7’s photo is noticeably clearer and has far less blur around the leaves on the tree. The central vehicle is sharper, and the colors of the vehicles on the right are more accurate. Zoom in, and even the deep background remains sharper, and there’s less obvious noise, too.

In the second photo, the Pixel 5’s cooler tone and arguably better white balance show. But there’s much more noise than in the Pixel 7’s image, which is also far warmer. In real life, the window display was somewhere between the two in terms of color, but the lack of noise in the store’s signage and the door shows where Google has made advancements on the Pixel 7.

The Pixel 7’s front camera isn’t very good, and neither is the Pixel 5’s. Both are hurt by the fixed focus, and neither shows any drastic differences in skin tone to my eyes (apart from the Pixel 7 adopting a cooler tone than the Pixel 5). But far worse is the portrait mode performance, which is almost always bad on the Pixel 7, and pretty poor on the Pixel 5, too.

Edge recondition is all over the place from both cameras here, and while my skin is a little cooler in the Pixel 7’s shot, all the other colors and textures are identical. While there have been advancements made on the rear cameras, the selfie camera performs very similarly, and I don’t like either photo very much.

Is the Pixel 7 a worthy upgrade from the Pixel 5?

It’s lowlight photos where the Pixel 7’s advancements are most obvious, and in using the Portrait mode with the rear camera, too. However, these aren’t going to be modes used as often as the main and wide-angle cameras, so it’s worth thinking quite hard about whether the upgrade is worth it.

The Google Pixel 5 remains a superb camera phone, and if it’s still your phone of choice, there’s little evidence Google has dramatically moved the camera on for the Pixel 7. Yes, there are advantages elsewhere — the phone’s design and build quality are both superior — but if the camera is the reason you love the Pixel 5, then it may be worth waiting for the Pixel 8 before upgrading.