It turns out AMD isn’t cutting GPU prices after all 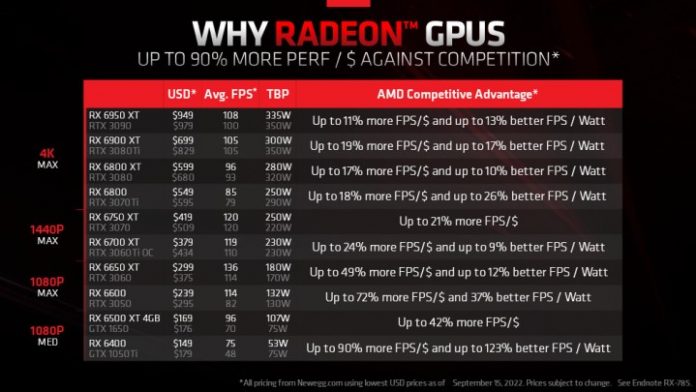 Nearly two weeks ago, AMD published a chart showing price cuts to every card in its RX 6000 range, following the controversy surrounding the RTX 4090’s absurdly high price tag. It turns out those price cuts aren’t official — they’re just what AMD’s graphics cards are currently selling for on Newegg.

The chart (below) clarifies that the prices were gathered from Newegg, but it still suggests that AMD was cutting the official list price of its GPUs. That’s what we originally published on September 22, and we weren’t alone. TechPowerUp proclaimed “AMD cuts MSRPs of Radeon RX 6000 series graphics cards,” while Wccftech reported “official price cuts.” PCMag also ran the story, though it has since updated the article with a statement from AMD.

An AMD spokesperson shared the same statement with Digital Trends: “To clarify, AMD has not reduced the price/MSRP of the Radeon RX 6000 Series graphics cards. The chart we provided, which is included in the article, simply listed the latest USD etail prices at Newegg as of September 15, 2022.”

Although AMD never claimed it was reducing the official list price, it’s not hard to see why so many publications ran with that story. Toward the end of August, reports started circulating that AMD and Nvidia partners were readying to cut GPU prices. Nvidia already had a round of price cuts in July, and given the excess supply of graphics cards coming out of the GPU shortage, additional price cuts were in order.

In addition, the chart came two days after AMD announced it would launch its RX 7000 graphics cards on November 3. As a new generation approaches, we typically see price cuts on the previous generation to make way for the new GPUs on store shelves. Combined with Nvidia’s price cuts, several reports of excess inventory, and a downward trend for GPU prices overall, it’s easy to see how so many publications got the impression that AMD was reducing official list prices.

Clearly, this was a large misunderstanding, but the main issue is that it’s a misunderstanding that was able to circulate for nearly two weeks. We didn’t get word from AMD until October 3, which is the same day that PCMag updated its story with the statement from AMD.

Although prices are mostly up to retailers anyway, the list price still sets expectations for general pricing and performance. This is a common criticism of Nvidia with cards like the RTX 3080, which is only now starting to sell for the list price Nvidia announced two years ago.

GPU prices are on a downward trend, so it’s no surprise that AMD’s graphics cards are selling for less than list price now. Regardless, it’s important to know that those price shifts come from a lack of demand, not a decision from the top of AMD.

Facebook
Twitter
Pinterest
WhatsApp
Previous articleThis gaming chair makes your butt a part of the action
Next articleXiaomi 12T Pro impressions: Back in the megapixel race