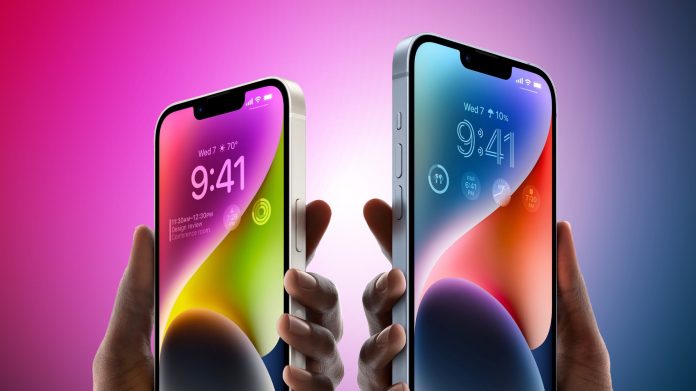 Apple’s iPhone 14 Plus, its latest 6.7-inch non-Pro iPhone, officially launches this Friday, October 7, and Apple’s website is currently showing shipping delays into next week for all models and configurations.

The launch of the iPhone 14 Plus comes three weeks after the other models in the iPhone 14 family became available, and a full four weeks since pre-orders began.

The shipping delay is in stark contrast to a check we made one week after pre-orders opened, when there was no delay for any iPhone 14 Plus model. At the time, delivery estimates for the ‌iPhone 14‌, iPhone 14 Pro, and ‌iPhone 14 Pro‌ Max were delayed by days and in some cases weeks.

The ‌iPhone 14‌ Plus is meant for customers who want a larger ‌iPhone‌ without all the features of Apple’s high-end models, but demand for the new model has not reached the highs that Apple anticipated.

On the Monday following the start of pre-orders, analyst Ming-Chi Kuo said the iPhone 14 and ‌iPhone 14‌ Plus had seen “lackluster” pre-order results that were worse than those for the third-generation iPhone SE and the ‌iPhone 13‌ mini, indicating that Apple’s positioning of the two new standard models may have failed.

In response to the poorer-than-expected demand, Apple is said to have asked assembly partners to transfer some iPhone 14 production capacity to the iPhone 14 Pro and iPhone 14 Pro Max, the latter of which has reportedly seen the highest demand so far.

There have also been reports that Apple has shelved plans to increase production of the two devices. On the other hand, the ‌iPhone 14 Pro‌ and ‌iPhone 14 Pro‌ Max continue to see high demand.

Both non-Pro iPhone 14 models have also already depreciated in value more than twice as much as the iPhone 13 in the same time frame last year, according to one report.

The ‌iPhone 14‌ Plus, like the ‌iPhone 14‌, features the same chip as the iPhone 13 Pro, camera improvements, and other minor enhancements. Reviewers called the iPhone 14 an “iPhone 13S,” noting the little improvements and changes compared to its predecessor.Related Roundup: iPhone 14Buyer’s Guide: iPhone 14 (Buy Now)Related Forum: iPhone
This article, “iPhone 14 Plus Showing First Delivery Estimate Delays Ahead of Friday Launch” first appeared on MacRumors.com

Facebook
Twitter
Pinterest
WhatsApp
Previous articleDeals: You Can Get $400 Off Every 2021 MacBook Pro Model Right Now on Amazon
Next articleDon’t miss your chance to get this Lenovo gaming laptop for $730
- Advertisment -