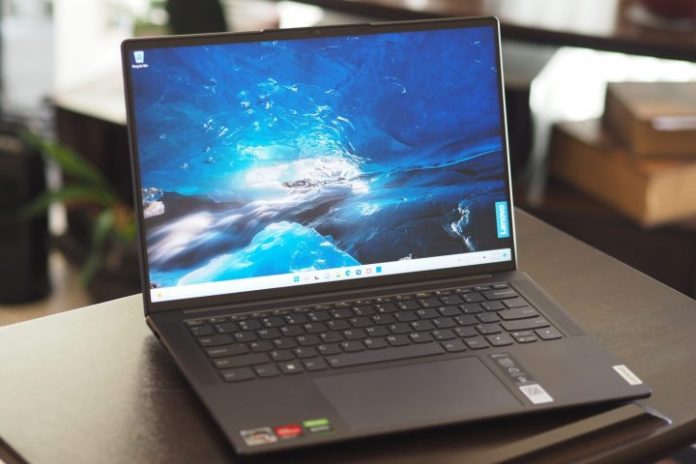 Two of the top laptop processors in 2022 are the Intel Core i7-12700H vs AMD Ryzen 6900HS, but with so many other factors impacting laptop performance, it’s hard to compare them head to head. So, when Lenovo offered me the opportunity to run the Intel version of its excellent Slim 7 Pro X laptop, which I had previously reviewed in its AMD incarnation, I jumped at the chance to pit two very similar laptops against each other.

I say “very similar” because, unfortunately, they’re not identical. Importantly, they both used the Nvidia GeForce RTX 3050 GPU, which means we’re directly comparing the CPUs themselves. The most important difference, beyond the processors, was that the AMD version running the Ryzen 9 6900HS CPU enjoyed 32GB of 6400MHz LPDDR5 RAM. The Intel Core i7-12700H version was loaded with “just” 16GB of slower 5200MHz LPDDR5 RAM. That means that while our benchmark results are likely to be close enough to gauge the performance differences, we can’t be truly scientific. And the Ryzen 9 6900HS is a lower-power version of that chip while the Core i7 is full-power.

Even so, the results were interesting, if not groundbreaking. They mainly demonstrated that the choice between Intel and AMD isn’t so clear-cut that performance alone can make the difference.

Performance is close, but no cigar

In our CPU-intensive benchmarks, the results were mixed. The AMD model was behind in Geekbench 5, both in single-core mode where we expect AMD to fall behind Intel and in multi-core where AMD can be expected to take the lead. The laptops scored close to the same in the PCMark 10 Complete benchmark that mixes up a variety of productivity and creative tasks.

In our Handbrake test that encodes a 420MB video as H.265, the Intel version was a few seconds faster but the difference wasn’t meaningful. Note that I tested in both balanced and performance modes using the same Lenovo Vantage utility, and the results are posted in the table. In Cinebench R23, the AMD version was slower in single-core and slightly faster in multi-core in balanced mode.

The bigger difference came in the Pugetbench Premiere Pro benchmark that runs in a live version of Adobe Premiere Pro. This benchmark stresses both the CPU and GPU, and the Slim 7 Pro X was a solid performer for a 14-inch laptop with an RTX 3050. It was at least 60% faster than laptops running Intel Iris Xe integrated graphics. The Intel version was faster, though. It scored about 31% faster in balanced mode, and its performance ratcheted up another 8% in performance mode. The AMD version wasn’t able to complete the benchmark in performance mode, so this makes the Intel version even faster.

The Pugetbench benchmark has several components, including Export, Playback, and GPU effects. The biggest difference between AMD and Intel versions came in the Playback score, where AMD scored 62.5 and Intel scored 122.5. Intel has several Adobe optimizations, and clearly, it optimized this set of tasks. Given the discrepancy in the amount and speed of RAM, Intel is the clear winner in this benchmark.

It’s safe to say that for CPU-intensive productivity and creative tasks, these two CPUs are similarly matched. That’s impressive given the AMD chip’s lower power rating. In Adobe apps, Intel has the lead. And with equal RAM, maybe the Intel chip pulls even further ahead.

Both Slim 7 Pro X versions I tested came with 70-watt-hour batteries and the same 3.5K IPS display. So, it’s fair to compare their battery lives and draw some conclusions, at least given Lenovo’s implementation.

While the Intel chip might be significantly faster in one of our benchmarks, the AMD chip is much more efficient. That’s thanks to its lower power rating as well as the overall efficiencies of its architecture.

Another difference between Intel and AMD is connectivity. It’s not the most significant advantage, but Intel chipsets support Thunderbolt 4, which is both faster and provides better display support than most USB-C connections, including the most recent USB4. And, the Intel machine has the faster Wi-Fi 6E and Bluetooth 5.2, compared to the AMD version’s Wi-Fi 6 and Bluetooth 5.1.

A difference, but is it meaningful?

You get roughly equal performance out of the Ryzen 9 6900HS and Core i7-12700H CPUs except in Adobe applications, where Intel is faster. The Core i7 is also faster in single-core performance, which might make a difference in day-to-day use. Then, you get the benefit of Thunderbolt 4 and Wi-Fi 6E with the Intel version.

But you also get significantly longer battery life with the AMD version of this laptop. In fact, the battery life discrepancy is arguably more significant than the performance delta. Pricing is hard to determine given Lenovo’s penchant for mixing up its available configurations and costs, but the AMD version is also likely to be less expensive than a similarly configured Intel model.

In the end, the choice comes down to some narrow specifications. But you probably shouldn’t use performance alone in making your choice.