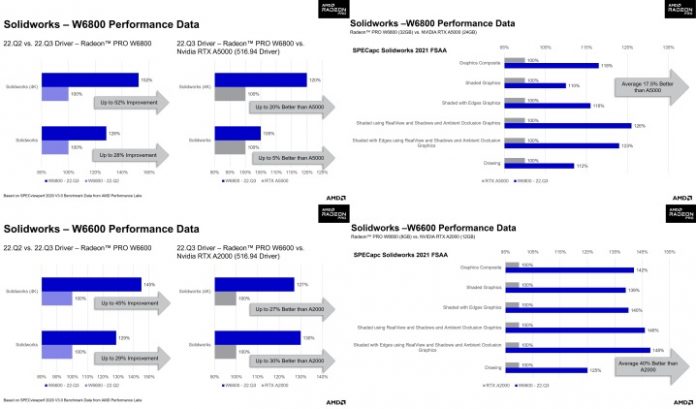 AMD has just revealed that its new AMD Software: Pro Edition 22.Q3 driver can increase GPU performance by up to 72%. With this update, AMD addresses a major pain point for its customers: subpar performance in OpenGL applications.

While the driver is aimed at AMD’s GPU range for professionals, consumer graphics cards can benefit, too, and the gains even stretch to gaming. Here’s what we know about the new Radeon driver and how to get it.

To make this kind of a performance gain real, AMD had to change the architecture of its Pro Edition driver. Historically, AMD has gotten some bad feedback over the state of its OpenGL drivers, and over the years, this was one of those things that Nvidia definitely did a better job at, and this applies both to professional software and gaming scenarios. After several attempts, though, it seems that AMD may have finally hit the jackpot with its OpenGL driver.

According to a blog post from AMD, the new driver improves GPU performance by as much as 115%. The metrics are all based on AMD’s professional GPUs, and the company compares its Radeon W6800 to the Nvidia RTX A5000, claiming that its own graphics card managed to beat Nvidia in several applications.

AMD itself calls this driver update a “giant leap for OpenGL-based applications.” In the blog post, AMD stated: “The release of AMD Software: PRO Edition 22.Q3 […] brings our most significant performance advancements to date in all OpenGL applications and many of your other favorite creating, designing, modeling, and CAD software applications. The latest improvements are edging us toward and beyond the competition, such as Autodesk Maya, where we see improvements up to 41% greater on the AMD Radeon PRO W6800 GPU versus an Nvidia RTX A5000 GPU.”

As mentioned, it’s not just the professionals who will benefit from this new change, because AMD is adding these updates to its consumer-grade Adrenalin drivers, too. This means that if you use OpenGL-based apps or play such games, you should be able to see the performance uplift for yourself. In addition, if you have one of the best graphics cards from AMD and you use it to run these professional visualization apps, you can also try out the new drivers for yourself.

AMD first introduced this new architecture in July 2022 and it claims to have gotten great feedback, so it seems like it’s worth giving it a try. This isn’t the first time AMD made a huge leap with just one driver update — just recently, we had a 92% performance boost from drivers alone, too.

You can download the new AMD Software: Pro Edition 22.Q3 driver or the latest Adrenalin drivers on AMD’s official website.