HomeNewsSamsung’s Galaxy A23 5G packs a 120Hz display and a huge battery...
News 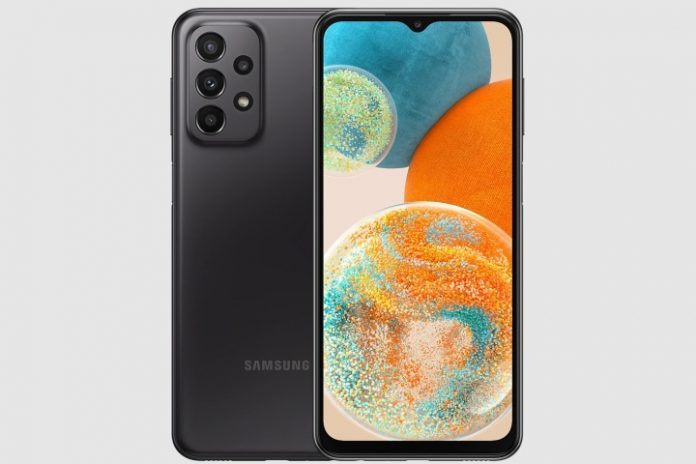 Just over a week ago, Samsung introduced a 5G version of the budget Galaxy A23 smartphone in Taiwan. The company has now decided to bring it to the U.S. with an attractive asking price of $300 for an unlocked unit.

To recall, the LTE version the Galaxy A23 has been on sale in U.S. stores since March of this year. The most obvious change introduced by the A23 5G is, well, 5G support. However, Samsung has also bumped up the screen refresh rate to 120Hz, which is quite a surprising perk for a phone in this price bracket.

The rest of the phone is not too shabby either. The design follows in the footsteps of its more premium siblings like the well-received Galaxy A53 5G and the Galaxy A73. Unfortunately, it appears that Samsung is only bringing the Tide Black trim to the U.S. market, and not the more appealing Mist Blue and Peach models.

Ont the front you get a 6.6-inch Full HD+ display with a 120Hz refresh rate and adaptive tech behind it. But do keep in mind that this is still an LCD panel and not an OLED display, which isn’t surprising given the Galaxy A23 5G’s asking price.

Samsung hasn’t cut any serious corners in the camera department either. Leading the charge is a 50-megapixel main camera, sitting alongside a 5MP snapper for ultrawide photography.

There are a couple of 2MP sensors as well, for depth capture and macro photography, respectively. The selfie camera is a fairly modest affair at just 8MP, housed in a teardrop-shaped notch at the top. For Samsung purists, this notch aesthetic goes by the name Infinity-V.

Qualcomm’s Snapdragon 695 chipset runs the show under the hood, married to 4GB of RAM and 64GB onboard storage. Buyers will be pleased to find a microSD card slot that allows storage expansion by another 1TB. Samsung, you should extend this love to flagships too.

I’ve personally tested the aforementioned Qualcomm chip ticking inside phones like the OnePlus Nord CE 2 Lite, Xiaomi Redmi Note 11 Pro+ 5G, and the Vivo T1 — and came out thoroughly impressed by its performance.

It’s a shame that only the black trim is coming to U.S. stores. Samsung

It’s cool to see Samsung making a wise choice and not going with one of its low-end Exynos chips for the Galaxy A23 5G. A fairly beefy 5,000 mAh battery keeps the lights on, but there’s no wireless charging perk or blazing-fast wired charging (capped at 25 watts) benefit to be found here.

The Galaxy A23 5G remains loyal to the cause of the 3.5mm headphone jack, so that’s a relief. Interestingly, QuickShare is also part of the package, allowing the phone to seamlessly pair with gadgets like Samsung’s own smartwatches and true wireless earbuds (like the Galaxy Buds 2 Pro).

If you’re intrigued by the overall package, the Galaxy A23 5G will be up for grabs from Samsung’s official website and retail outlets starting today. On the carrier compatibility side of things, T-Mobile and AT&T have got you covered.