HomeNewsLG’s doomed Rollable phone appears on video to show us what we...
News 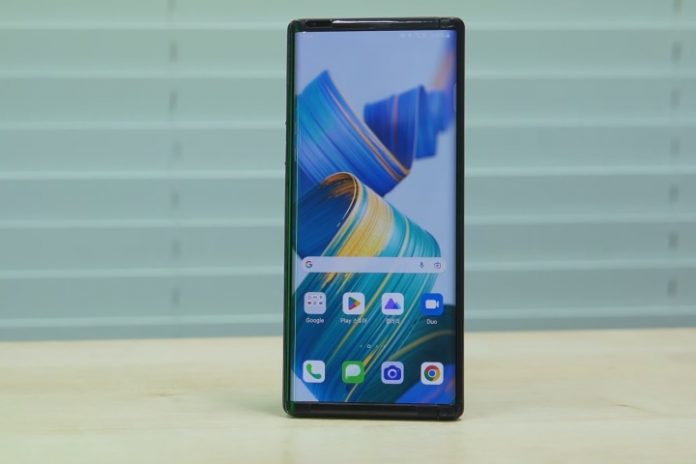 At CES 2021, LG wowed us with a short teaser of its innovative Rollable concept phone. Unfortunately, the company shuttered its smartphone division, and with it, plans of launching its rollable display phone were also put on ice forever. However, the LG Rollable has now been detailed in a video, complete with a market-ready retail package.

It appears that the phone was unceremoniously canceled right at the cusp of a public launch, which is a shame and a huge loss for phone enthusiasts. The LG Rollable had a lot going for it. The top and bottom edges have rail-inspired sliding mechanisms that extend/shrink the frame to reveal/hide the extra screen real estate.

When the LG Rollable is being used like a regular phone, the expandable portion of the screen that wrapped around the edge and covered just over half of the rear panel was turned off. However, if you flip the device, it can be turned on and used as a regular screen, albeit with limited functionality, like the Samsung Galaxy Z Flip 4.

A gorgeously futuristic sacrifice to a cutthroat market.

With the rear portion of the screen activated, the doomed LG phone also offered users the flexibility to use it as a viewfinder for clicking selfies using the high-resolution rear cameras. The idea is reminiscent of Huawei’s Mate X series foldable phones.

LG was also apparently not a fan of a notch, holes, or an ugly floating cutout for the front camera array. Instead, the selfie camera is tucked neatly in the top-left corner of the frame, offering a truly full-screen experience.

Over at the back, the rollable segment blended almost seamlessly with a raised rib housing the dual selfie camera and the fingerprint sensor right beneath it. The biometric hardware is the reliable round sensor, instead of the cramped pill-shaped and side-mounted fingerprint sensors on modern-day phones.

There appears to be some kind of pressure or light sensor on the right edge that activates the display rolling and unrolling behavior.  The mechanism appears to be quite robust, enough to move a couple of thick books as the screen unfolds.

However, a three-finger swipe from the left to the right edge, or vice versa, would also do the job. It also looks quite neat and almost flawlessly executed by LG’s engineers. Plus, there’s a one-tap quick toggle button system that can be accessed by swiping inward from the right edge to do the same.

Doing right by the tablet genes

As the display slides open to reveal a tablet-like expanse, the UI elements also expand accordingly. For example, the Settings app smoothly expands to a two-row format, a design element that Google showcased with Android 12L. LG also appears to have created a side panel-like system that we see on Samsung’s One UI skin, allowing users to access their favorite apps and tools in a jiffy.

The display in its natural state is a 6.8-inch unit, but when it’s rolled out, it offers a tablet-esque 7.4-inch panel. The lights are kept on by a 4,500mAh battery, but there’s no scope for wireless charging owing to the design.

The aspect ratio is on the taller side at 1.5:1, which is a far cry from the squarish approach taken by the likes of Samsung’s Galaxy Z Fold 4 and the Oppo Find N. But the tall aspect ratio on the LG Rollable is also quite advantageous, because letterboxing is minimal while watching videos, and the situation with games would also be more palatable.

As far as specs go, the rear camera setup includes a 64-megapixel main snapper capable of 8K video capture, sitting alongside a 12-megapixel ultra wide-angle shooter. Qualcomm’s Snapdragon 888 keeps it ticking in tandem with 12GB of RAM and 256GB of onboard storage.

Tipping the scales at 285 grams, the LG Rollable fell in the same weight class as the Samsung Galaxy Z Fold 4. Going by the level of software finesse and the solid hardware of the engineering prototype, it appears that the LG Rollable was nixed at the last moment.

Oppo is currently working on the same formula, but its own take on the concept got stuck in quality assessment hell after showcasing it to journalists and releasing a few tantalizing teaser videos.