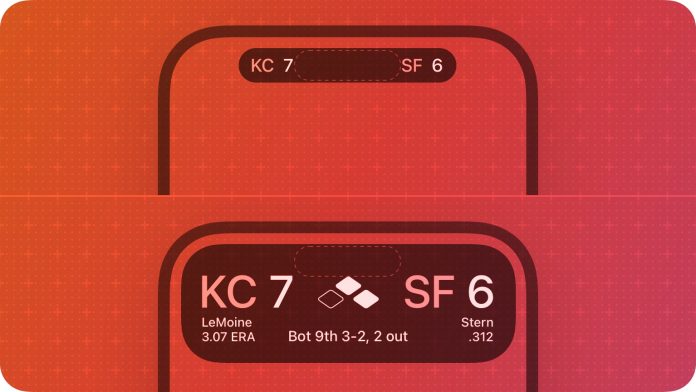 Apple earlier this month announced that iOS 16.1 will enable a new Live Activities feature which allows iPhone users to stay on top of things that are happening in real time, such as a sports game or a food delivery order, right from the Lock Screen. On the iPhone 14 Pro and Pro Max, Live Activities also integrate with the Dynamic Island.

On Monday, we learned that when following a sports event the Dynamic Island shows a live-updating scoreboard with the number of goals scored by each club on either side of the True Depth camera pill, which Apple refers to as a Live Activity’s “compact” presentation. When long pressed, the Dynamic Island expands to show the time elapsed and play-by-play action.

Since then, Apple has shared its Human Interface Guidelines (HIG) for app developers intending to support Live Activities, and one notable detail is that on ‌iPhone 14 Pro‌ models, users will be able to switch between two Live Activities using the Dynamic Island if they are following multiple tasks or events at the same time, thanks to a separate “minimal” presentation:

Apple’s guidelines go on to add that when people touch and hold a Live Activity in the minimal presentation described above, the system displays the content in an expanded presentation, just as it does for the compact version.

Example image showing “minimal” presentation of multiple Live Activities
The implementation Apple describes above should come as welcome news to those who envision, say, following two Premier League matches that are being played at the same time, where either one result or both could end up being decisive for the teams’ league standings.

In other noteworthy tidbits in the HIG, Apple cautions developers not to offer Live Activities that exceed eight hours, and asks them to consider removing Live Activities from the Lock Screen after they end:

Finally, Apple notes that Live Activities adapt their colors to “look great” in both the Light and Dark system modes, as well as on the dimmed screen of an always-on display.