HomeNewsI gamed on the Galaxy Z Flip 4’s cover screen and it...
News 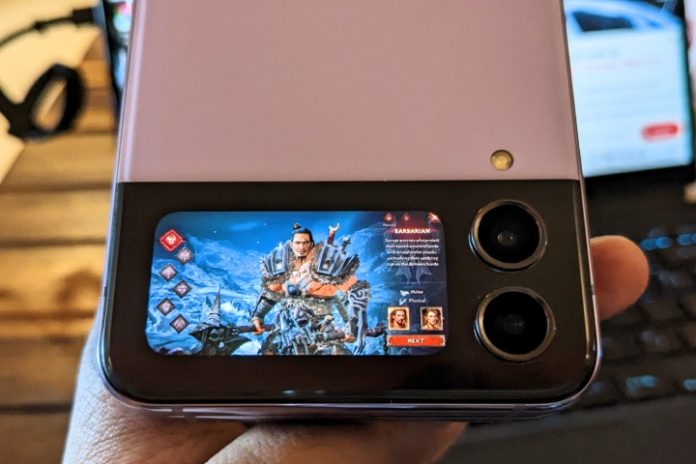 Samsung’s latest clamshell foldable, the Galaxy Z Flip 4, is a winner in many regards. However, one area where Samsung developers are still playing it safe — almost to a restrictive level — is the cover screen functionality. Samsung has bumped up the secondary screen’s resolution, but not much has changed in terms of what users can achieve on it.

There are more widget controls alongside an extra dash of wallpaper customization, but that’s just about it. Interacting with notifications is still extremely limited, and you definitely can’t run apps on it. Thankfully, CoverScreen OS lets you bring a full-fledged app drawer to the 1.9-inch screen.

Thanks to CoverScreen OS, every game installed on your phone is available to play on the Samsung foldable’s cover screen. But I’ll cut right to the chase here. The experience is not particularly good because this is not how mobile games are intended to be played. But if you’re adamant, know that the journey feels like a pleasant challenge in itself.

Got toothpicks for a thumb?

The resolution downgrade is apparent, but it’s the teeny-tiny text that is going to give you a hard time. Some games might look a tad choppy, but things won’t degrade down to the level of classic 8-bit PC games. To put it more accurately, it just hits the middle ground between discernible and jagged edges reminiscent of Symbian-era Java games.

Another thing you really need to keep in mind is the screen real estate available for your fingers to hit the on-screen buttons. Unless you have thumbs as thin as a chopstick, you will have a hard time hitting the on-screen buttons. The conclusion? Well, stick to games that rely more on swipe gestures than tap-based inputs.

The perfect screen for casual gaming

I started my tiny screen gaming journey with Candy Crush Saga, of course. To be honest, the experience wasn’t as excruciating as I expected it to be. Despite the small size of the candy blocks, the boundaries actually look sharp. But the experience is not going to be the same for all games.

If you prefer mobile games like billiards, carrom, chess, reversi, and similar indoor or tabletop games, the Galaxy Z Flip 4’s cover display will serve you just fine. Of course, each game might present its own set of challenges.

For example, aiming the cue and drawing a specific amount of power on a thin meter is quite tricky. And if you’ve been blessed with thick thumbs, lord have mercy! I handed the phone to my 11-year-old nephew, and he quickly grew wary of the testing experience despite being a Candy Crush stan.

Alto’s Odyssey looks absolutely gorgeous on the Galaxy Z Flip 4’s cover display. And since there are no on-screen buttons and the only inputs needed are taps, playing it was the most satisfying experience during my test phase. Alto’s Adventure was no different.

Pushing the limits with Call of Duty and Apex

Next, I switched to Asphalt 9: Legends. As much as I hate to write this, I actually quite enjoyed it. When you fire up the game, elements like the lobby and settings section look quite blurry, and you really have to look up close in order to discern each button or its iconography.

I started with the default Touch Drive mode, and everything was smooth. The flagship Qualcomm chip inside ensures that even the busiest moments of crashing and spinning in the air are rendered smoothly. Even after I switched to the tap-based mode for steering and enabled the on-screen brake/nitro buttons, the whole experience was quite rewarding.

Going a step further, I even plugged in my wired Xbox controller and won a few races. Unfortunately, only a few games officially support Xbox controller input and even fewer play well with the older wired version. Asphalt 9 happens to be a pleasant exception. The likes of Call of Duty: Mobile or Apex Legends simply won’t read the wired controller.

Next, I turned to Diablo Immortal, and I was again left mighti;y surprised by how smooth it turned out. Yes, the small on-screen buttons proved to be a hindrance, and I often found my thumb covering the left half of the screen as I tried to swipe my way around.

It can be a brief test of patience, but once I got a hang of it, I found it was possible to vanquish a handful of mini-bosses and complete a few missions. Character movement was smooth, there were no jagged edges, and the demon-infested landscape was rendered beautifully.

I particularly loved how clean the cutscenes looked on the tiny 1.9-inch screen. I couldn’t help but notice that of all the games that I tried on the Galaxy Z Flip 4’s secondary display, Diablo Immortal translated best to the 260 x 512 resolution.

To further push the envelope, I launched Call of Duty: Mobile. Again, to my utter surprise, the multiplayer and battle royale experience turned out to be fluid. You will again have to grapple with the cramped screen real estate, but once you get past it, the actual gameplay turns out to be unexpectedly pleasant.

The on-screen controls are precise and work as they would on a normal-sized screen. Even during intense close-quarter combat, the phone didn’t break a sweat. The phone only stuttered with rendering the in-game animations, such as the victory highlight reel after a match ends. However, those are not frequent.

Call of Duty: Mobile is compatible with the current-gen Xbox and PlayStation 5 controllers. If you have one of these lying around, I’d strongly advise using the controller instead of relying on the tightly packed on-screen controls.

In case you’re wondering how Apex Legends plays on the Galaxy Z Flip 4’s cover screen, it actually offers an even better experience than Call of Duty: Mobile. I wanted to try Genshin Impact, too, but I just couldn’t bring myself to see the game’s stunning visuals downgraded on the teensy, low-resolution screen.

Gaming on the Galaxy Z Flip 4 really surprised me

There’s an inexplicable retro-esque joy in playing games on the Galaxy Z Flip 4’s screen. Serious mobile gamers will balk at the idea, but for folks looking to explore what their pricey flip phone can accomplish, it’s nothing short of an exciting adventure.

Of course, it’s best to limit the adventure to casual, less-demanding games. On the flip (ha!) side, witnessing a top-tier game like Diablo Immortal absolutely fly on the tiny screen is something that every smartphone user should experience at least once in their lifetime.