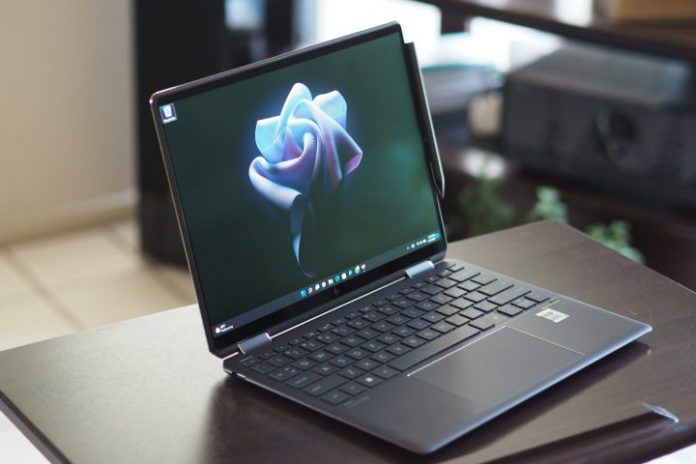 Simply put, the HP Spectre x360 13.5 and Dell XPS 13 Plus are two of the best laptops you can buy at any price and any size. These flagships sit at the top of the pile in terms of premium designs and components.

But choosing between the two isn’t simple. They each have their relative strengths and are similarly priced. Below, we go over the differences between the Spectre x360 13.5 and XPS 13 Plus to help make your decision a little easier.

Both are premium laptops, and the XPS 13 Plus has a wider range of prices. Dell has a slight advantage here in that you can get the maximum RAM with the OLED display, even though you’re paying more for it.

The most important design difference between the two laptops is in their form factor. The Spectre x360 13.5 is a convertible 2-in-1 while the XPS 13 Plus is a traditional clamshell. That means the HP is slightly thicker and heavier and has a larger bottom chin on the display to accommodate the more complex hinges. That also makes the HP more flexible and potentially useful, with the ability to convert to media, tent, and tablet modes and to allow the use of a quality active pen. If these things don’t matter to you, then that’s not much of an advantage. But if they do, then the Spectre is a more suitable laptop.

The Spectre x360 13.5 and XPS 13 Plus are similar in that they’re both constructed of CNC machined aluminum throughout and are solidly built. You’ll find no bending, flexing, or twisting in either machine. The Spectre has a more extravagant aesthetic with rounded, gem-cut, and colored edges and notches cut into the bottom of the display and the rear of the chassis.

One notch houses a USB-C/Thunderbolt 4 port and the other a 3.5mm audio jack. The XPS 13 Plus is a more streamlined design, with simple lines accentuated by the edge-to-edge keyboard and a palm rest that’s unbroken thanks to the embedded haptic touchpad. The Dell also has LED function buttons rather than physical keys, which lends an air of modernity.

HP has done a great job with Spectre keyboards for several years now. They have plenty of key spacing and large keycaps, with a switch mechanism that’s snappy and light with a precise bottoming action. It’s one of the best keyboards in Windows laptops, rivaled only by Apple’s excellent Magic Keyboard on the latest MacBooks. The XPS 13 Plus keyboard is quite different, with an edge-to-edge design and very little space between keys. The mechanism is also precise and snappy, and while quite different from the Spectres is quite good.

The biggest difference is in touchpads. While the Spectre x360 13.5’s touchpad is large enough and very good as a mechanical version, the XPS 13 Plus’s haptic touchpad is superior. It’s more precise and offers the ability to click anywhere. At the same time, the HP benefits from pen support and touch on every display option compared to optional touch with the Dell.

The Spectre x360 13.5 has a much better webcam, coming in at 5MP with great low-light performance and some nice HP Presence features like Auto Framing and Appearance Filter that smooths out blemishes. The XPS 13 Plus webcam is far more pedestrian, coming in at just 720p and offering an inferior video image.

Finally, the Spectre x360 13.5 offers better connectivity, including a USB-A port for legacy support, a 3.5mm audio jack, and a microSD card reader. The XPS 13 Plus has just the same two USB-C ports with Thunderbolt 4. The lack of an audio jack is contentious, and while Dell does throw in a USB-C to headphone jack, that’s quite limiting. Since power is also provided by USB-C, you’ll need a dock or adapter of some sort to use headphones while charging.

We reviewed the Spectre x360 13.5 with a 15-watt Intel 12th-gen 10-core/12-thread Core i7-1255U, a lower-power variant of Intel’s Alder Lake chips for thin and light laptops. Our XPS 13 Plus review unit was equipped with the 28-watt 14-core/20-thread Core i7-1280P, a faster CPU on paper. Both laptops offer utilities that allow for some thermal adjustment, and both were effective in running quieter and cooler in balanced mode versus faster, louder, and hotter in performance mode.

Our benchmarks, though, didn’t show nearly the divide one might expect. The Dell was faster in GeekBench 5 and Cinebench R23 multi-core (except in performance mode), as well as in our Handbrake test that encodes a 420MB video as H.265. The Spectre x360, on the other hand, was faster in Geekbench 5 and Cinebench R23 single-core. The HP managed to pull out the win in the PCMark 10 Complete benchmark that runs through a series of productivity, multimedia, and creativity tests.

These results are surprising, but the XPS 13 Plus is thinner and so likely couldn’t keep its CPU as cool. In real-world use, the laptops will provide similarly excellent productivity performance while both will be underpowered for all but nominal creative tasks. Neither laptop was particularly fast in the 3DMark Time Spy test and so neither is a viable gaming machine.

In terms of image quality, however, both are simply spectacular. They’re almost identically as bright and nearly as accurate, with both enjoying excellent DeltaEs of under 1.0. The Dell’s AdobeRGB gamut is slightly wider, but it’s not going to be noticeable. Both displays are phenomenal for everyone alike, productivity users, creators, and media consumers. Note that the difference in contrast is due to the colorimeters used. Both have equally inky blacks.

Both laptops offer four-speaker audio, with similar performance in terms of volume and bass. They’re both okay for binging Netflix on occasion, but they both benefit from a good set of headphones.

The XPS 13 Plus is smaller, thinner, and lighter. However, both laptops can be easily slipped into a backpack and carried around.

If you’re particularly careful, the XPS 13 Plus might get close to a full day’s battery life. The Spectre x360 13.5, however, is more likely to make it all the way.

The Spectre x360 13.5’s flexibility and battery life win out

Yes, the XPS 13 Plus has some innovative features that make it stand out. But the Spectre x360 13.5 offers more functionality thanks to the flexibility of its 2-in-1 design, and it has better battery life with similar performance. Given that it’s a little less expensive, that gives HP a narrow win in this very competitive shootout.