HomeNewsEdited tweets may be coming to your Twitter timeline soon
News

Edited tweets may be coming to your Twitter timeline soon 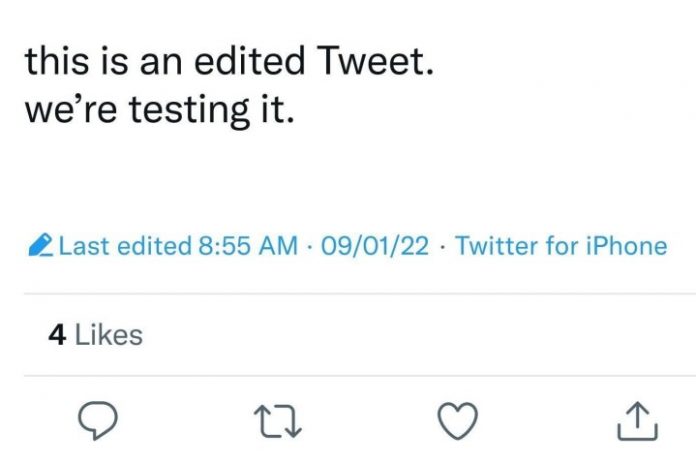 You may soon see edited tweets on your timeline because Twitter has begun testing its Edit Tweet feature.

this is happening and you'll be okay

According to the blog post, Twitter’s current testing of the Edit Tweet feature is limited to an internal test by its team. And then, “in the coming weeks,” the test is expected to be expand out to actual users. The catch? Apparently, those who are paid subscribers to Twitter Blue will get to use the feature first.

Twitter’s announcement of the test also included details about what the current version of Edit Tweet looks like. At this point, the Edit Tweet feature allows tweets to be edited “a few times” within the first 30 minutes after the tweet was first published. Tweets that have been edited are also supposed to display an “icon, timestamp, and label” as a way to make it obvious to users that a given tweet was edited. Twitter also shared the screenshot of an edited tweet below with Digital Trends. The screenshot can also be found in Twitter’s blog post.

It’s also worth noting that the editing option doesn’t necessarily mean that the original tweets just go away. Twitter’s blog post makes it clear that the current version of the Edit Tweet feature comes with a label that users can select to view a given edited tweet’s “Edit History” — which Twitter says “includes past versions of the Tweet.” And that’s an important distinction if Twitter keeps the Edit History aspect of Edit Tweet, because a valid criticism of allowing users to edit their tweets is that it could lead to people intentionally misleading others or removing important context from Twitter conversations. If there’s an easily accessible record of what was tweeted and when, that may help ease concerns a bit about the possible abuse of Edit Tweet.

If you’re not one of the users currently or soon-to-be testing Edit Tweet, don’t fret. In its announcement, Twitter said those not testing Edit Tweet will still be able to tell if tweets in their timeline were edited.

Facebook
Twitter
Pinterest
WhatsApp
Previous articleApple’s antivirus strategy for Mac has gone fully preemptive, but is that enough?
Next articleThis Lenovo 2-in-1 laptop is 66% off — now just $126 for Labor Day