HomeNewsSamsung’s Galaxy Watch is great, but the S Pen would make it...
News

Samsung’s Galaxy Watch is great, but the S Pen would make it amazing 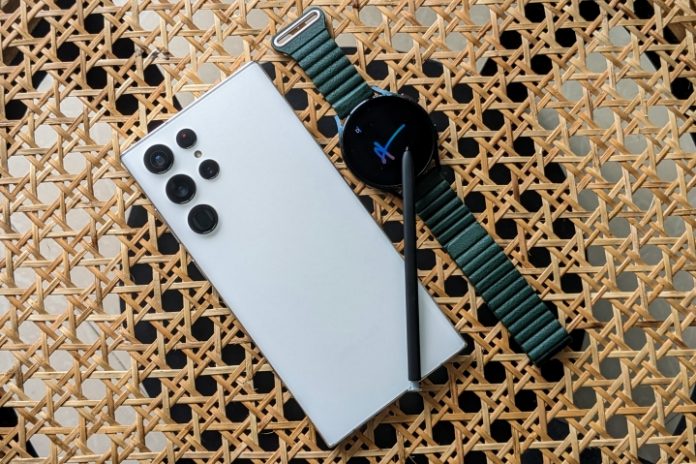 It rebuilt the smartwatch interface based on top of Google’s Wear OS, bringing new features and better app support, all while retaining a familiar-looking interface. And as much as I enjoy using Samsung’s smartwatches, I think they could be made even better with the S Pen.

Why S Pen support for the Galaxy Watch makes sense

While the Galaxy Watch is a feature-rich smartwatch, Samsung’s abundant ecosystem leaves room for one more method of input that could tie the experience together more cohesively: support for the S Pen.

The S Pen has been pivotal in helping Samsung’s flagship Note and Tab series stand apart from the crowd. Most of Samsung’s top-tier mobile devices now come with stylus support, including the Galaxy S22 Ultra and Galaxy Z Fold 4. But the Galaxy Watch has been left in the dust.

I put together a list of reasons why I feel S Pen support on the Galaxy Watch is the missing piece that Samsung needs to complete its ecosystem puzzle. It may seem like a strange request at first, but I think it’s exactly what Samsung needs.

Samsung is a market leader when it comes to devices that support stylus input. Despite the transient relation of other brands with Android tablets, Samsung has consistently been committed to devices that sport the S Pen — whether in the form of the Galaxy Tab lineup or the Galaxy Note (now merged into the Galaxy S Ultra series).

The company’s expertise and history with making devices that feature S Pen support gives it a fair advantage — in making stylus-friendly devices — against any other brand, including Apple.

Similarly, Samsung is the front-runner among display manufacturers, leading with the largest share in the market for smartphone OLED displays. It is also among the leading producers of smartwatch displays, while its biggest competitor in the battle for a more binding ecosystem — Apple — has practically outsourced all of its manufacturing. Samsung is a major supplier of displays for Apple, which is expected to procure over 80 million OLED displays from the Korean giant for the upcoming iPhone 14 series.

With its stronghold in markets for both premium OLED displays for smartwatches and displays that support stylus input, Samsung boasts a unique position from which it can dominate the industry if it chooses to add S Pen support to the Galaxy Watch.

Making the most of mature smartwatch software

There’s no denying that as modern user interfaces get cluttered with more and more features, precision in pointing becomes imperative, especially for power users. The S Pen is a marvel in pointing devices, and support on the Galaxy Watch escalates its position as the most sought-after choice of input methods for users.

Meanwhile, smartwatch brands have spent considerable time selling watches as extensions of smartphones, allowing users to accomplish more trivial tasks such as checking messages, vetting a caller’s value, scrolling through news headlines, or interacting with voice assistants to control smart devices. Until the smartphone is wholly dissolved with the tide of time and replaced by more immersive gadgets, the utility of — and our dependence on — smartwatches is only likely to increase.

More importantly, the silicon at the heart of Wear OS smartwatches is finally starting to mature after almost a year of neglect and sluggish performance. The recently announced Snapdragon W5 and W5+ Gen 1 smartwatch platforms from Qualcomm are based on the much more sophisticated 4nm process as compared to the 12nm fabrication process of its predecessor — the Qualcomm Snapdragon Wear 4100+. This provides for a 100% performance boost on the newer chips.

Despite moving to Snapdragon chips for the majority of its flagship devices, Samsung is still using proprietary Exynos chips on the Galaxy Wear lineup. Both the Galaxy Watch 4 and Galaxy Watch 5 series are powered by the same Exynos W920 chip which, although fabricated on a slightly less refined 5nm process, features relatively newer CPU cores.

If we assume this to be a linear growth, smartwatches launching a few years down the line could be as powerful as smartphones today — if not as powerful as the devices of the same era. In such a scenario, a highly meticulous S Pen will be a worthy and valuable input option.

Samsung’s S Pen lineup has several tricks up its sleeves, many of which have nothing to do with writing. Besides functioning as a device for pointing and annotations, the S Pen works as a remote control for supported Galaxy smartphones or Tabs.

With the help of the inbuilt motion sensors, the S Pen can detect air gestures conducted by a user. Using those gestures remotely, you can click pictures, navigate through slides in a presentation, control music and media playback, or even just navigate through the One UI interface to open and use apps without focusing on the display.

Taking these functionalities into account, the S Pen could further enhance the experience on a Galaxy Watch through remote gestures, especially when a person is immersed in work on other Samsung devices.

Samsung has already shown that it’s willing to adapt the S Pen for foldable support and more advanced features. What’s to stop it from adding to the lineup with a Galaxy Watch version?

Despite achieving excellence in hardware, Samsung’s Galaxy ecosystem still trails behind Apple’s walled garden. The most evident ground for this lag is the exclusivity that Apple guarantees, primarily in terms of the software experience. Unlike Samsung — which shares Android on smartphones and tablets, as well as Windows on Galaxy Book notebooks with other manufacturers — Apple’s ecosystem is webbed with the help of software that it consciously limits to itself.

Besides their principles about ownership and distribution of software, Apple and Samsung differ in another major respect. While Samsung is a global leader with prowess in manufacturing compelling and groundbreaking hardware, Apple thrives as a design company that creates tools that enhance people’s lives. This essentially also means Samsung targets a different set of users — those who desire unrivaled performance from their gadgets but without giving up on the flexibility of open and inclusive operating systems such as Android and Windows.

While both scenarios are experiential, Samsung’s prosperity depends on specific hardware. In such a case, S Pen support on the Galaxy Watch can potentially be the secret weapon that ensures a unifying experience across all Samsung devices, creating the perfect ecosystem without any ingredients from Apple.