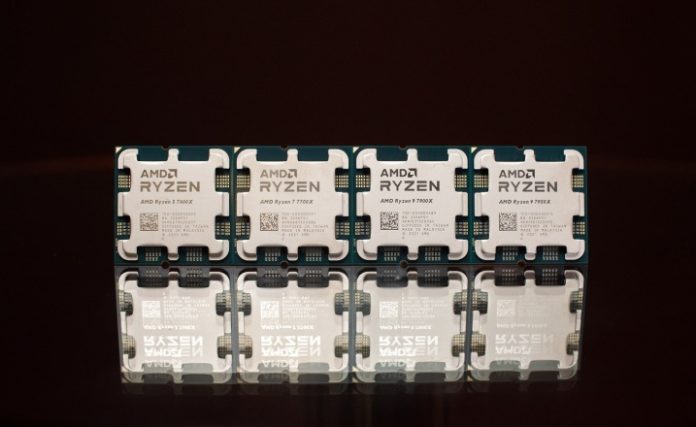 Team Red is wasting no time, it seems. The Ryzen 7000 launch just concluded, and AMD shared specs, projected performance, and platform details for its upcoming Zen 4 CPUs. We’re getting four new processors on September 27, from the $300 Ryzen 5 7600X to the $700 Ryzen 9 7950X.

Price cuts are attractive, but performance is king. And AMD is bullish on performance for its first 5nm desktop processors. The most impressive claim AMD made was that the Ryzen 5 7600X beats out Intel’s Core i9-12900K in games. AMD shared several benchmarks, including a demo where the Ryzen 5 was 11% faster in F1 2022

The company also says all four of the processors it announced have faster single-core performance than the Core i9-12900K — a 6.6% improvement with the Ryzen 5 7600X up to an 11.5% increase with the Ryzen 9 7950X. Comparing apples to apples, AMD says its flagship Ryzen 9 7950X is up to 57% than the Core i9-12900K in content creation tasks, as showcased with a demo of the V-Ray ray tracing benchmark.

Part of the performance improvement comes fromthe move from 7nm down to 5nm, but it also comes from increased power and clock speeds. Core counts remain unchanged compared to the previous generation, but both Ryzen 9 chips jump to 170 watts from 105W in the previous generation, while the Ryzen 5 and Ryzen 7 both have a 105W TDP (compared to 65W with the Ryzen 5 5600X).

The increased power also allows AMD to push clock speeds up to 5.7GHz on the Ryzen 9 7950X, and that’s before CPU overclocking. Contrary to a rumor, Ryzen 7000 supports full overclocking, with the upcoming AM5 socket rated for up to 230W of power delivery.

Despite increased power consumption, AMD is stressing efficiency for its Ryzen 7000 processors. The 5nm manufacturing process leads to 62% lower power at the same performance or 49% more performance at the same power compared to Ryzen 5000, according to AMD.

This efficiency allows the Ryzen 9 7950X to offer a 74% improvement in overall performance compared to the the Ryzen 9 5950X when both chips are limited to 65W.

We’ll have to wait and see if AMD’s claims ring true, though. Ryzen 7000 is a significant step, ushering in the new AM5 platform that AMD says it will support to 2025 and maybe beyond. It also marks the introduction of DDR5 memory for AMD, as well as PCIe 5.0.