HomeNewsMotorola shows that the Razr 2022 is making its best feature even...
News 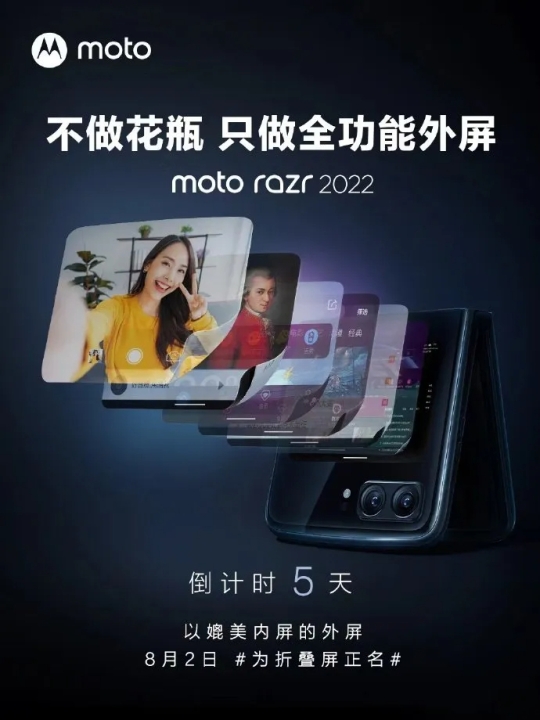 Motorola’s upcoming clamshell foldable is set to debut on August 2. The brand has begun teasing the device since the launch is around the corner. In the latest tease, we see a glimpse of the Moto Razr 2022 and its bigger outer screen.

The device appears to be getting a major design overhaul. Along with the design, Motorola has also upgraded the hardware of the device. Thus, this could be the Moto Razr everyone was waiting for. Here’s a quick recap of what Motorola’s confirmed.

It’s now official that the Moto Razr 2022 will feature a larger main display than its predecessors. While the exact size of the cover display is not out yet, it is getting bigger for sure. According to leaks, the Razr 2022 will sport a 3-inch cover display in contrast to the 1.9-inch display on the rumored Z Flip 4. Since the cover display is larger this time, we expect Motorola to put that to good use. Besides this, the bezels are diminished, and the fingerprint scanner has moved to the right edge of the phone.

Seeing how past Razr foldables already had sizable outer screens, it’s great to have confirmation that the Razr 2022 is pushing this advantage even further. And even though we don’t know the exact size of the new outer screen, it looks quite generous in Motorola’s latest teaser image.

As mentioned before, Motorola is playing big in terms of hardware with the biggest change in the chipset. The Motorola Razr 2022 will pack Qualcomm’s Snapdragon 8 Plus Gen 1 processor, unlike its predecessor, which featured a midrange Snapdragon 765G chipset. It’s also expected to be paired with up to 12GB of RAM and 256GB of onboard storage.

Further ahead, the device will likely sport a 6.7-inch Full HD+ OLED panel with a 120Hz refresh rate. Rumors also point to a 50-megapixel main camera and 32-megapixel ultra-wide lens. While at the front, it will likely get a 32-megapixel camera for selfies. The Moto Razr 2022 is also confirmed to ship with a 3500mAh battery, likely with support for 25W charging. Moreover, the device should run Android 12 out of the box.

The August 2 date will see Motorola unveil the Moto Razr 2022 in China, though the device’s availability beyond that remains unclear. A U.S. release seems very likely, we just don’t know when it’ll happen. Here’s to hoping it’s sooner rather than later, because the Moto Razr 2022 looks better and better with each new look that we get.