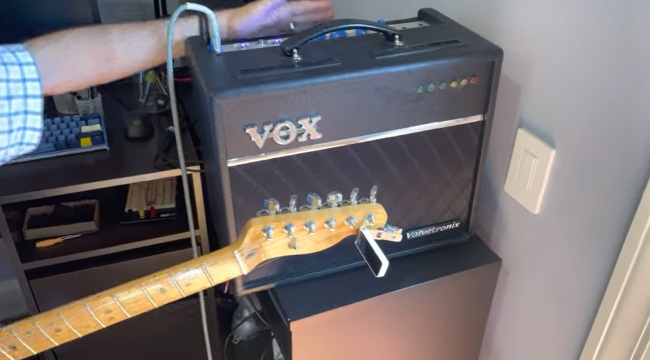 A tech enthusiast has found yet another interesting way to use Raspberry Pi, this time to bring a piece of audio back from the dead. Developer David Silverman has used the tiny computer as the core to revive an old Vox guitar amplifier.

The developer shared his work on YouTube, detailing how he used a Raspberry Pi 3B+ computer, paired with a class D amplifier, and some self-developed custom Python scripts, to bring the old guitar amp back to its former glory.

With his custom code, he was able to add some customized audio tuning including delay, reverb, distortion, WAH, bass, mid, and treble, with knobs to manually adjust each new option. He also added LEDs to the case, which light up as the guitar is played.

Silverman replaced the original internals of the Vox amplifier, which had gone bad, with the Raspberry Pi, which features an audio injector card that he was able to connect to a new Fossi-brand audio amplifier unit. He also used the MCP3008 as an analog-to-digital converter since the Raspberry Pi does not have native analog reading ability.

The Vox amplifier retained many of its original parts, including two USB ports, an Ethernet port, and an HDMI output, in addition to its original speaker and power supply. Finally, he programmed potentiometers to respond to his custom audio tuning and LED lighting effects.

The project wasn’t without its issues, however. Silverman noted he fried several amplifiers before getting the Fossi-brand unit to work. The system also required a second power source for the Raspberry Pi, as the original source had only enough juice to power up the class D amplifier.

He added that it took several months to accurately develop the scripts for the potentiometers, with the coding for the WAH being the most difficult. Silverman offers his custom Python scripts on Github.

Raspberry Pi is well known as a tiny computer that sells for $35, allowing for the initiated to create wonderful DIY projects that couldn’t otherwise exist. We recently documented how our own editor Phil Nickelson created a travel Wi-Fi router using an old Raspberry Pi.

A mysterious OnePlus phone might launch in the U.S. soon

Galaxy S23: Everything we know about Samsung’s 2023 flagship

Google is officially killing yet another chat app