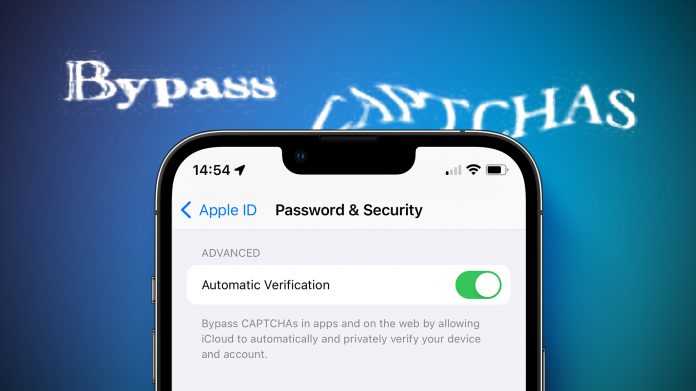 Tapping on images of traffic lights or deciphering squiggly text to prove you are human will soon be a much less common nuisance for iPhone users, as iOS 16 introduces support for bypassing CAPTCHAs in supported apps and websites.

The handy new feature can be found in the Settings app under Apple ID > Password & Security > Automatic Verification. When enabled, Apple says iCloud will automatically and privately verify your device and Apple ID account in the background, eliminating the need for apps and websites to present you with a CAPTCHA verification prompt.

Apple recently shared a video with technical details about how the feature works, but simply put, Apple’s system verifies that the device and Apple ID account are in good standing and presents what is called a Private Access Token to the app or website. This new system will offer a better user experience for tasks such as signing into or creating an account, with improved user privacy and accessibility compared to CAPTCHAs.

Cloudflare and Fastly have already announced support for Private Access Tokens, meaning that the ability to bypass CAPTCHAs could be coming to millions of apps and websites powered by those platforms, and the feature will roll out more widely over time.

In the first betas of iOS 16 and iPadOS 16, Automatic Verification is enabled by default. Apple said the feature is also supported on macOS Ventura. All of the software updates are currently in beta and will be released later this year.Related Roundups: iOS 16, iPadOS 16
This article, “iOS 16 Will Let iPhone Users Bypass CAPTCHAs in Supported Apps and Websites” first appeared on MacRumors.com

How to turn on FSR on the Steam Deck