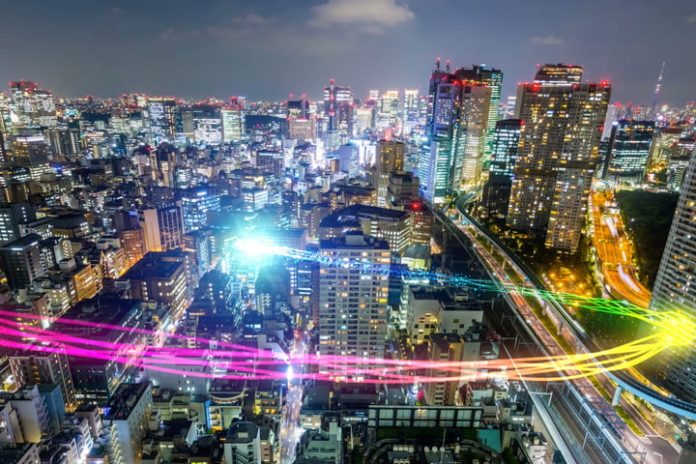 The rollout of 5G technology around the world has been considerably more complex than the wireless standards that came before. Since 5G demands unprecedented levels of performance, carriers have to navigate a tricky sea of radio frequencies to ensure they can deliver the best speeds and coverage possible.

The result is that 5G gives carriers a wealth of options for how to best roll out their 5G networks, allowing them to try for an ideal balance between coverage and performance. Under ideal circumstances, this would provide the best 5G for everyone. However, in the real world, things are considerably more complicated.

At the top end of this range of the 5G spectrum is where the mmWave, or “millimeter wave,” frequencies live, running from 24GHz to 47GHz. Technically speaking, millimeter wave is defined as the Extremely High Frequency (EHF) range from 30GHz to 300GHz, so named because those are the frequencies where wavelengths get as short as one millimeter.

However, as with the C-band spectrum, the Federal Communications Commission (FCC) redefined the lower end of the mmWave range in the U.S. to begin in the upper range of the Super High Frequency (SHF) zone, starting at 24GHz, crossing over into EHF on the way to 47GHz, which is currently the top end of the spectrum allocated for 5G.

The FCC plans to license even higher mmWave spectrum eventually — it’s looking at the 57–64GHz range that’s currently unlicensed and the lightly-used 71GHz, 81GHz, and 92GHz frequencies. However, that’s still likely a few years away, particularly since carriers have yet to utilize the mmWave spectrum they already have fully.

As anybody who has worked with home Wi-Fi routers knows, higher frequencies provide more bandwidth for faster speeds, but this comes at the expense of range and coverage. The 2.4GHz signal from your router will likely cover your entire home but at relatively poor speeds, while the 5GHz frequencies offer excellent performance for gaming and streaming but might not make it to your basement or back room.

This is just how the laws of physics work when it comes to radio waves. Higher frequencies are faster but can’t travel nearly as far as the lower and slower frequencies.

Cellular carriers face the same challenges with delivering strong and fast signals to their customers as you would finding an ideal place for your Wi-Fi router. It’s just that carriers have to deal with this on a much larger scale.

Using higher frequencies allows carriers to deliver faster speeds, but the tradeoff is that they need to build more towers and place them closer together to provide the same coverage that a lower-frequency signal would.

At one time, the high-frequency mmWave 5G band was what many believed would be the future of 5G technology. After all, it can deliver ridiculously impressive speeds that go well beyond what most wired broadband services are even capable of.

Under ideal conditions, 5G speeds over mmWave frequencies can reach 4Gbps, although it’s more typical to find devices hovering in the 500Mbps–1Gbps zone. However, even the slowest mmWave speeds are 3–4 times faster than the average 5G performance available when using lower frequencies.

As some carriers quickly discovered, the problem is that these extremely high frequencies have a depressingly short range; a single mmWave transceiver isn’t likely to provide solid coverage for anything much larger than a city block.

That shouldn’t be surprising when you consider that mmWave signals start at 24GHz — an order of magnitude above the frequencies customarily used for Wi-Fi and cellular communications.

However, that places them well out of range of anything that would typically cause interference, particularly since everything on those frequencies also has a similarly short range. Usually, you’ll find the EHF spectrum used by satellite weather systems, military weapons radar, police speed radar, and security screening systems at airport checkpoints.

With all that in mind, it’s not surprising that most carriers haven’t done much with mmWave technology.

Among the U.S. carriers, only Verizon bet heavily on mmWave in its early 5G deployments. AT&T dabbled in it while T-Mobile mainly steered clear of that spectrum.

Verizon’s gamble allowed it to boast stunningly fast 5G speeds early on. A 2020 report by OpenSignal showed Verizon with a massive global lead, with average download speeds more than twice as fast as its next-nearest rival, South Korea’s LG U+.

However, the trick to these high speeds was that Verizon was using mmWave spectrum exclusively for its 5G network. The carrier had no slower midband or low-band 5G networks to drag its numbers down. This was Verizon’s 5G Ultra Wideband Network as it originally existed. It ran almost entirely on the 28GHz spectrum.

AT&T opted for more strategic use of mmWave. It had licensed a chunk of 24GHz 5G spectrum early on, primarily deployed for business use in a few cities. Later, it dropped $1.2 billion to acquire a sizeable chunk of 39GHz spectrum, which it’s been more actively deploying to its customers. AT&T calls this its 5G+ service.

Technically speaking, T-Mobile does have some mmWave deployments in a few cities, but the carrier doesn’t talk about it very much. T-Mobile had a nice chunk of fast midband spectrum to play with long before its rivals could get their hands on the coveted C-band spectrum, so mmWave hasn’t been nearly as important to the carrier’s plans.

Rather than base its entire 5G network on mmWave as Verizon did, AT&T has focused on augmenting its lower-frequency 5G with mmWave cells in extremely dense areas like stadiums and airports.

This takes advantage of one of the most significant benefits of mmWave. The extremely high frequencies don’t just offer higher bandwidth for individual users; all that extra bandwidth also lets it handle congestion far more effectively.

To use some oversimplified math, if a mmWave transceiver can offer up to 4Gbps of throughput to a single device, 40 devices can easily get stable 100Mbps connections without slowing each other down.

Further, the shorter range of mmWave means that carriers have to deploy many more transceivers. By the time AT&T has put up enough transceivers to cover a football stadium, it can efficiently deliver high-performance 5G to thousands of folks attending a game or event.

Similarly, mmWave is ideal at airports, not just because of the high number of passengers passing through but also because those frequencies are so far removed from anything used in aviation that there’s no controversy surrounding them.

T-Mobile has also quietly said that it will continue building out mmWave where it makes sense to do so, but unlike AT&T and Verizon, it doesn’t plan to differentiate its mmWave network. T-Mobile customers won’t see a “5G+” or “5G UW” symbol on their phones when connected to mmWave. Instead, folks on T-Mobile will get solid coverage and performance whether they’re sitting at home or attending the Super Bowl.

Some carriers have licensed other chunks of mmWave spectrum as well, although most of it likely won’t be available for use anytime soon.

For example, T-Mobile and Dish hold licenses that account for 99% of the 47GHz spectrum. It’s unclear what those carriers plan to do with this, particularly since it will provide even worse coverage against Verizon’s 28GHz and AT&T’s 39GHz.

More significantly, no consumer smartphones can even reach the 47GHz frequencies right now. Apple’s iPhone 13 lineup and Samsung’s Galaxy S22 models only support a handful of mmWave 5G bands, which are designated as n257 (28GHz), n258 (26GHz), n260 (39GHz), and n261 (28GHz). Of these, only n260 and n261 are used by U.S. carriers; the others are for compatibility with mmWave 5G services globally.

The future is C-band

As exciting as the mmWave spectrum sounded in the first days of 5G, the carriers have realized that’s not where the future of 5G technology lies.

Verizon had to learn that lesson the hardest of all, with an early 5G network that was nonexistent to 99% of its customers. Verizon followed that with a lower-frequency “Nationwide 5G Network” that shared space with its 4G/LTE signals. This gave customers the “5G” indicator on their phones but generally delivered speeds that weren’t better than 4G.

It wasn’t until Verizon could deploy its C-band spectrum that its 5G fortunes truly began to change. This wasn’t entirely Verizon’s fault; it first had to drop $45 billion to license the C-band spectrum, then battle an aviation industry that feared it would cause problems with aircraft instruments.

Nevertheless, when Verizon finally turned the key on its new C-band in early 2022, many more of its customers began to see true 5G speeds. It was such a leap in performance that Verizon made the new C-band network part of its Ultra Wideband 5G service.

While AT&T has been rolling out its C-band service more gradually, customers in the few cities where that’s available have also discovered an impressive boost in their 5G speeds.

Even T-Mobile, which already has its strong 2.5GHz Ultra Capacity 5G network, plans to use the higher-frequency C-band spectrum to give its customers a necessary boost in those areas where more capacity is needed.

In the end, the role of mmWave in public 5G technology is to augment existing networks, not to replace them. The massive capacity of the mmWave spectrum makes it ideal for delivering reliable 5G in extremely dense population centers. However, the short-range means it’s never going to be able to stand on its own. mmWave will always be most suitable when used as a “power-up” to bolster 5G in certain areas.