HomeNewsQualcomm is launching new Snapdragon chips on May 20
News

Qualcomm is launching new Snapdragon chips on May 20 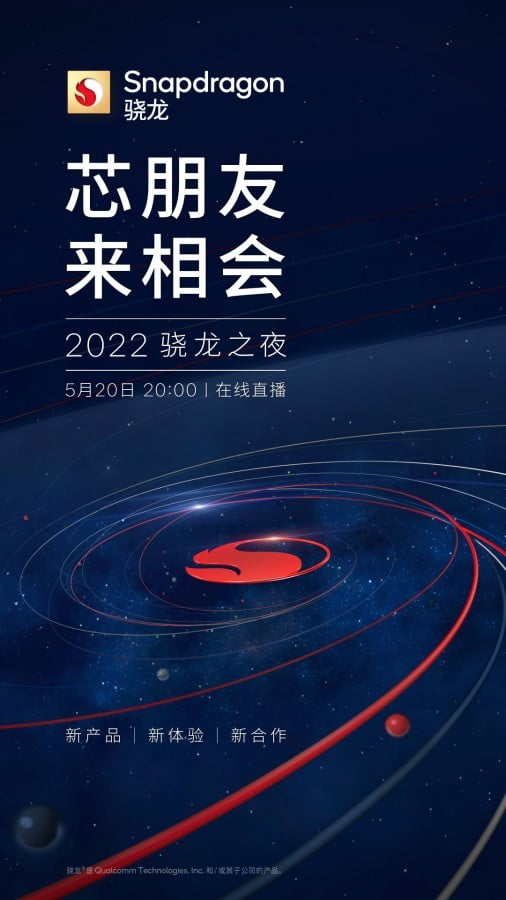 Qualcomm has put out a teaser on Weibo to confirm its next event which is scheduled for May 20. The event bears the tagline, “new products” and is likely to be livestreamed. There, the company will unveil new Snapdragon chipsets, presumably the Snapdragon 7 Gen 1 and Snapdragon 8 Gen 1+.

A few years ago, Qualcomm began to produce “Plus” versions of some chipsets. These chipsets are basically souped-up versions of their respective models and are used in Android smartphones that launch during the latter half of the year. In this case, Snapdragon 8 Gen 1+ will bring improvement over the existing Snapdragon 8 Gen 1, supposedly in the GPU section. It is reported that the chipset will be fabricated on a TSMC’s 4nm manufacturing process. The Snapdragon 8 Gen 1 also uses the 4nm process but unlike TSMC it was fabricated by Samsung.

As with previous years, this new flagship chipset has already been pegged for use in upcoming multiple Android phones and foldables including Moto Edge 30 Ultra, the Galaxy Z Fold 4 and Flip 4, and OSOM OV1. More specifically, the Moto Edge 30 Ultra could be the first device to ship with the Snapdragon 8 Gen 1+ chipset.

Apart from updates to its flagship line, Qualcomm is expected to reveal the Snapdragon 7 Gen 1 chipset. This would be the first mid-range chipset to get the new Gen 1 branding. The chipset is supposed to feature four Cortex-A710 performance cores clocked at 2.36GHz and four A510 units clocked at 1.8Ghz. The CPU is to be paired with an Adreno 662 GPU.

As for launch phones, the Oppo Reno 8 set for launch on May 23 is rumored to come with the upcoming Snapdragon 7 Gen 1 chipset. Oppo is yet to confirm the same but we will hear about it soon considering both events are just around the corner.