HomeComparisonRealme is the new OnePlus, and the GT 2 Pro’s prowess proves...
Comparison

Realme is the new OnePlus, and the GT 2 Pro’s prowess proves it 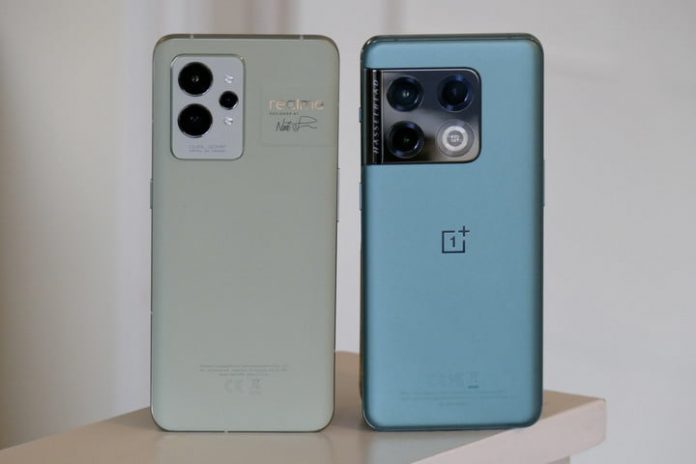 What has happened to OnePlus? Once the darling of the shrewd smartphone bargain hunter, the company has lost its way with the latest OnePlus 10 Pro and left itself open to being usurped by a cheaper newcomer. What’s worse (for OnePlus, not you) is the challenger comes from within. It’s the Realme GT 2 Pro, and it’s practically the same phone as the OnePlus 10 Pro, just cheaper.

Let’s look at the two together, and see why saving some money and ignoring the marketing is the wise decision here.

The OnePlus 10 Pro has a Galaxy S21 Ultra-style wraparound camera module, a matte-finish piece of Gorilla Glass 5 on the back, Gorilla Glass Victus over the screen, and a massive cluster of camera lenses with Hasselblad’s branding. All these are established tropes of the flagship smartphone, so you know what you’re getting with the OnePlus 10 Pro.

Pick up the Realme GT 2 Pro and it’s thinner and lighter, but the most striking difference is the biopolymer rear panel. It’s made from sustainable materials and has a look and texture of high-quality paper. Realme worked with industrial designer Naoto Fukasawa on the overall design, and his signature is even found on the device.

There’s nothing traditional about the Realme GT 2 Pro. It looks different, it feels different, and the materials used are different from any other flagship smartphone. The OnePlus 10 Pro is very attractive and designed using tried-and-tested methods, but it never feels special. The Realme GT 2 Pro does, plus it’s under 190 grams, something of a sweet spot for big-screen phones. The Realme GT 2 Pro has character in its design and it’s the one I’d pick up.

OnePlus is well known for its high-performance screens, so can Realme compete, or even come close? It’s bad news for OnePlus, and good news for you. They both use exactly the same 6.7-inch, 3216 x 1440 pixel, 120Hz LPTO 2.0 AMOLED screen with a billion colors and HDR10+ certification. The only difference is the Realme GT 2 Pro’s screen is flat, and the OnePlus 10 Pro’s is curved.

They have the same level of adjustment with several color modes, the option to select a Display P3 setting for a wider color gamut, and a way to change the color temperature too. I cannot see any difference between them when watching 4K YouTube videos, and no differences when using the OS or apps either. The sound from the speakers is slightly deeper and more rounded on the OnePlus 10 Pro, while the GT 2 Pro can sound tinny.

Flat screens usually have a harder time in bright sunlight, and indeed the GT 2 Pro suffers from reflections more than the OnePlus 10 Pro. On the other hand some people, particularly gamers, prefer a flat screen. Visually. when you put them next to each other. you won’t be able to say one is better than the other in terms of quality, and that’s what really matters.

Realme calls its software Realme UI 3.0 and OnePlus calls its version OxygenOS 12. Both are built over Android 12, and both are basically the same. I have no love for either, and would prefer to use Samsung’s OneUI or Google’s software on the Pixel, with both being better designed, more reliable, and simpler to use.

Both have the same Qualcomm Snapdragon 8 Gen 1 processor, and unsurprisingly, it makes both phones fly. But the Realme GT 2 Pro is a better value when you look at RAM and internal storage space. The regular Realme GT 2 Pro comes with 12GB of RAM and 256GB storage space, but you’ll have to pay for the most expensive OnePlus 10 Pro to get the same. Neither has a microSD card slot, though.

Put simply, both operating systems suffer from issues, the phones use the same processor, and they have the same capacity battery with equally fast charging. Not only that, the cheaper Realme GT 2 Pro phone has the same RAM and storage as the top OnePlus 10 Pro. Buying the cheaper one seems like a no-brainer.

This is where the OnePlus 10 Pro should absolutely make its higher cost known. After all, it has Hasselblad’s name attached, representing not only the expertise of a big-name camera maker, but also a significant investment on OnePlus’ part. The Realme GT 2 Pro has no such endorsement, so surely it can’t keep up, right?

Well, it can on the features and the specifications. Both have a 150-degree wide-angle camera and a 50-megapixel wide-angle camera, but differ with a 50MP main camera on the Realme phone and a 48MP on the OnePlus. The OnePlus has an 8MP telephoto for a 3.3x optical zoom, but this is missing from the Realme. Instead it has an unusual 3MP microscope camera for 40x magnification shots.

Take a look at the 150-degree, wide-angle, and main photos taken with each phone in our galleries. The wide-angle and main photos show how the OnePlus camera has a more subtle approach to white balance, and some more vivid greens and yellows, but I wouldn’t say it’s the overall better photograph in either case. The Realme’s landscape and the shade of the sky on the horizon is more natural.

The cameras represent the biggest spec and performance difference between the two phones, but neither is vastly better than the other, and the cheaper Realme phone manages to take excellent photos in almost all situations. Apart from the unfortunate omission of a telephoto camera (not that the 8MP telephoto on the OnePlus is great anyway), it’ll more than satisfy.

The OnePlus 10 Pro and the Realme GT 2 Pro are almost the same phone, just with different brand names slapped on them. How did this happen? They were both conceived under the watchful eye of BBK Electronics, and you can imagine it happening in the same conference room in the same office building, just on a different day and with different marketing teams scribbling on a white board.

It’s the illusion of choice, and there’s no real benefit to buying the more expensive one. Looked at cynically, the two (three, if you count the also very similar Oppo Find X5 Pro) only exist alongside each other to extract more money from those swayed by talk of a vibrant community, brand loyalty based on past hardware, or pretty marketing photos of people either daring to leap, or never settling?

Our advice? Don’t fall for the marketing. Just buy the cheap one. They have the same downsides as they all use the same software, you won’t be doing yourself out of any major camera or battery features, and you won’t compromise on performance or design either. Nice though the OnePlus 10 Pro is, the Realme GT 2 Pro better embodies what we all once loved about OnePlus — a low price, the latest processor, and fun everyday camera features.