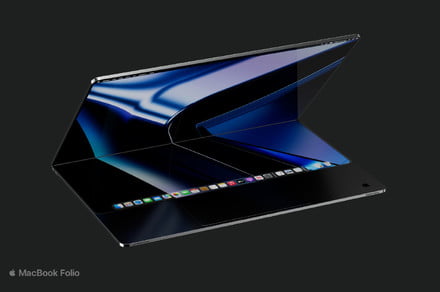 Apple is reportedly collaborating with LG to develop a foldable display panel. It is said to be an ultrathin cover glass for the upcoming 9-inch foldable device from the company. Analyst Ming-Chi Kuo also says that a foldable iPhone is unlikely to launch till 2025.

According to a report from The Elec, LG is teaming up with Apple to develop a foldable OLED panel. It is said that the display is being designed for tablets and notebooks with ultrathin glass as the cover window instead of polyimide. The news comes from the same report that says LG will be supplying 17-inch foldable 4K OLED panels to HP this year, which could make for an 11-inch display when closed.

The latest report comes after analyst Ross Young revealed that Apple is exploring all-screen foldable notebooks with displays around 20-inches in size. The upcoming foldable device is expected to unleash a new product category for Apple and result in a dual-use product. It could allow the device to work as a notebook with a full-size on-screen keyboard when folded and as a monitor when unfolded.

While the foldable Apple notebook rumors have been in full swing, users are also waiting for a foldable iPhone. And by the looks of it, a foldable Apple smartphone isn’t coming any time soon. As per Kuo, Apple is “actively testing” a device with a 9-inch foldable OLED display. It is likely to be a device that falls between iPhone and iPad. Apple’s first foldable device is expected to be a hybrid ‌iPhone‌ and ‌iPad‌, or simply a foldable ‌iPad‌.

According to the analyst, Apple is currently focusing on foldable medium-sized devices, which could be followed by larger-screen foldables. It might not be until 2025 that we see a foldable iPhone, if the latest reports are to be believed.