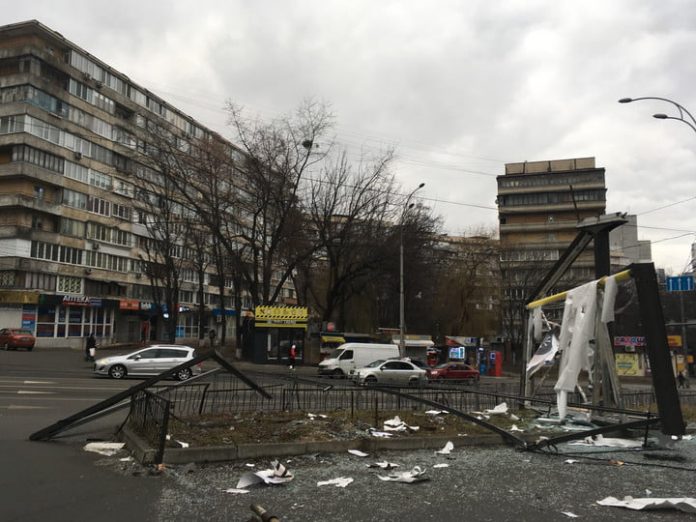 Ukraine’s resistance to invasion by Russia is being waged on mobile phones as well as on the battlefield and in the city streets.

Intelligence about troop movements is being relayed via images and videos to Ukrainian defenders. Both sides are also waging a propaganda campaign fueled by social media. Experts say the barrage of information could tilt the course of the war.

“Already we’re seeing images of captured Russian soldiers, dead children, and others, which are likely to make their way back into Russia,” Jeffrey Layne Blevins, a journalism professor at the University of Cincinnati, said in an interview. “If Putin can’t control the flow of information and imagery, it makes it difficult to control the narratives about the invasion in Russia, which might be why we’re seeing several protests and demonstrations in Russia already.”

Smartphones help to disseminate the situation on the ground, spreading key information from person to person. When traditional outlets are shut down or incapacitated, this method of communication only becomes more valuable.

Smartphones will be sure to play a vital role in the war in Ukraine as they did throughout the Arab Spring back in 2010, said Alex Lam, the chief strategy and business development officer, of the cybersecurity firm TechDemocracy.

“Smartphones help to disseminate the situation on the ground, spreading key information from person to person,” he added. “When traditional outlets are shut down or incapacitated, this method of communication only becomes more valuable.”

Good communications are critical on the battlefield, Tim Redfearn, a manager at ADS, a military equipment supplier, said in an interview.

“The access to cellphones is allowing the Ukrainian fighters to communicate with each other easily,” he added. “And since many of the fighters are civilians, it is allowing them to quickly mobilize a connected force.”

As long as the communication infrastructure is not dismantled, smartphones will give the Ukraine fighters an advantage, Redfearn said. However, Russian forces might be able to use the cell phone signals to track down fighters.

A war of public opinion

“The streaming of video has immediately contradicted Russian propaganda, and the world public opinion has been swayed accordingly,” he added. “Now that Elon Musk has activated Starlink for Ukraine, if Russia does take control of the communications infrastructure, the satellite links will continue to allow communications out of Ukraine.”

Myroslava Petsa: This is my hometown, the place where I was born, raised and fell in love for the first time. At least 28 Chernihiv residents have died in Russian aerial bombing today.#UkraineUnderAttaсk #UkraineRussiaWar pic.twitter.com/2KxAYoEQqG

Reddit and Twitter are full of first-hand accounts from the front lines by the public and citizen journalists, pointed out Charles Palmer, a professor of interactive media at Harrisburg University of Science and Technology.

“One rather humous consequence is from a dating app,” Palmer said. The Sun recently reported that as Russian soldiers entered populous areas of Ukraine, their Tinder mobile apps pinged eligible dating matches in the area.

“The story illustrates how dating has evolved yet has stayed the same,” he added.

The graphic images from the conflict are receiving some negative feedback. On the YouNow service where you can stream your own live video content, one user is using their smartphone to stream what is happening in Ukraine. But the service  wrote on its website that the stream from Ukraine has “gotten some feedback from users that broadcasting a war isn’t what they come to YouNow for — we are known as a place to connect with your family and friends, and that is still what the vast majority of our users do on YouNow.”

YouNow said it was standing firm. “To those users uncomfortable with viewing the events unfolding, we encourage you to avoid the livestream from Ukraine, which is tagged #war,” the company wrote. “We will continue to let users from Ukraine live stream what is happening on the ground as we feel it is vital to know what is happening and what is being experienced by those on the ground level.”

Official news outlets are also spreading their coverage across multiple channels. But some experts say that the widespread news coverage from mobile phone images could also hasten the public’s fatigue with the war.

“Having instant access on your phone brings the world that much closer,” Palmer said. Although having this type of access will also take its toll on us. If the war lasts more than a few days, any will tire from the constant bombardment and repeated coverage and stop following or seeking additional information.”

“While trust in the news media has declined, being able to get information and images from people on the ground makes it hard to ignore the horrors of what they’re experiencing,” Blevins said. “This also helps build trust in news reporting when journalists use these first-hand accounts when reporting about the conflict,” he added.

“Whatever the outcome of the war, smartphones will have an impact on how history remembers the meaning of the conflict,” Blevins pointed out.  “There will be a rich digital archive of images, commentary, and information that will make it difficult to cover up with a single propagandistic narrative,” he added.

Facebook
Twitter
Pinterest
WhatsApp
Previous articleApple spring event: Everything that won’t get announced
Next articleBig Tech has some wacky ideas about what to do once 6G becomes a thing
- Advertisment -