Mac Studio Teardown Indicates That SSD Storage May Be Upgradeable 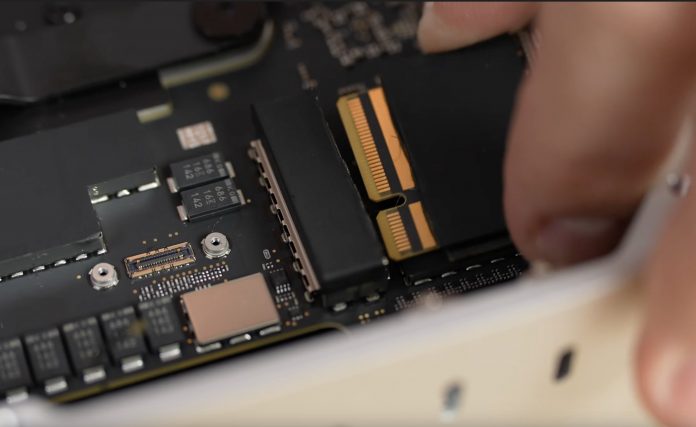 The Mac Studio’s SSD storage is not soldered in place and could be upgradeable, according to a teardown performed by YouTube channel Max Tech.

Image via Max Tech
In a detailed teardown video of the new ‌Mac Studio‌, Max Tech revealed that the ‌Mac Studio‌’s SSD storage is located in two slots, and is relatively easy to remove since it is not soldered down. The individual SSDs can be swapped between the two slots and appear to be modular.

On its website, Apple claims that the ‌Mac Studio‌’s SSD storage is “not user accessible” and encourages users to configure the device with enough storage at the point of purchase. This is likely because the internals of the ‌Mac Studio‌ remain difficult to access from the outside. The rubber ring on the base of the machine has to be removed to reveal four screws that provide a way to open the device, but once inside, the SSD storage is fairly easy to access and remove.

Max Tech suggested that Apple could offer SSD storage upgrades at a later date, similar to how it introduced a kit to upgrade the Mac Pro’s storage in mid-2020, but the easy access could be intended for use in repairs only.

The SSD storage in Apple’s other custom silicon-based Macs, such as the MacBook Pro, MacBook Air, and Mac mini, is soldered in place and cannot be easily upgraded, but some skilled technicians have attempted to do so.Related Roundup: Mac StudioBuyer’s Guide: Mac Studio (Buy Now)
This article, “Mac Studio Teardown Indicates That SSD Storage May Be Upgradeable” first appeared on MacRumors.com