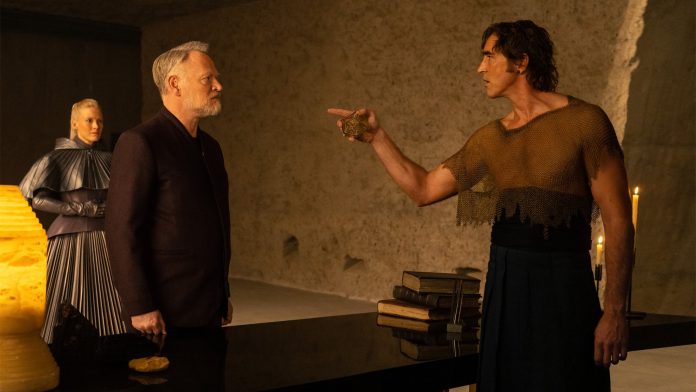 Apple today shared a first look at the second season of popular science fiction show “Foundation,” which is based on Isaac Asimov’s classic book series.

The show focuses on four crucial individuals as they transcend space and time to overcome deadly crises, shifting loyalties, and complicated relationships that will determine the fate of humanity.

“Foundation” was renewed for a second season back in October 2021, just a month after it was initially released. The second season of the show will add several new cast members that will be familiar to those who are fans of the books.

Because of the timescale of “Foundation,” several of the original cast members from the first season will not be returning, but Jared Harris, Lee Pace, Laura Birn, Terrance Mann, and Cassian Bilton will continue to be part of the show in the second season.

There is no word yet on when the second season of “Foundation” will premiere, but as the first season wasn’t released until September 2021, there are still likely several months to go until Apple is prepared to debut a new season.Tags: Apple TV Shows, Apple TV Plus
This article, “Apple TV+ Shares First Look at ‘Foundation’ Season 2 With New Cast Member Reveal” first appeared on MacRumors.com