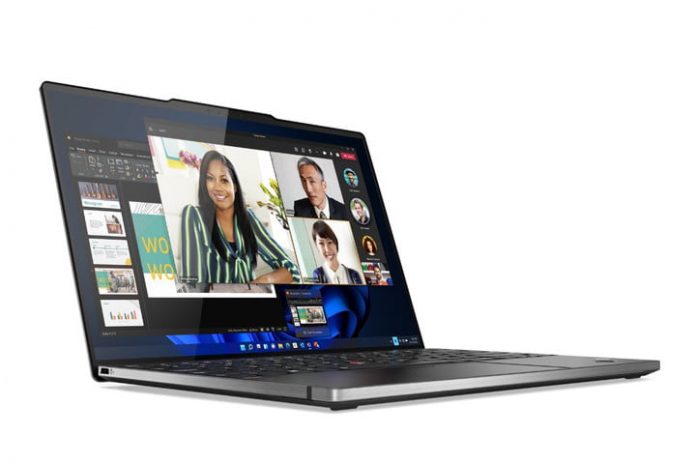 Lenovo’s 14-inch ThinkPad X1 Carbon has been its premium business thin and light laptop for years. The laptop is now in its 10th generation, and it’s benefitted from a series of updates that culminate in a place on our list of the best 14-inch laptops.

Now, Lenovo has introduced a brand-new ThinkPad Z line, with the 13.3-inch ThinkPad Z13 being a direct competitor to the ThinkPad X1 Carbon G10. Can this upstart laptop compete with such a venerable machine?

The ThinkPad X1 Carbon Gen 10 retains the iconic ThinkPad design and aesthetic of its predecessors. It’s the same all-black chassis constructed of a combination of magnesium alloy and carbon fiber in the lid, with red accents in the red dot above the “i” in the ThinkPad logo on the lid, the red TrackPoint nubbin in the middle of the keyboard, and a few other locations. The design is slightly different from the previous version, but it’s still very recognizable as a member of the ThinkPad line.

The ThinkPad Z13 sports what Lenovo calls a “progressive” design, and it’s a fresh look that features less of a taper along the edges and among the smallest display bezels available on a ThinkPad at a 91.6% screen-to-body ratio. There are also more color and material options, with black recycled vegan leather (plastic) on the lid with a bronze aluminum chassis and two all-recycled aluminum options, black and Arctic Grey. That gives the ThinkPad Z13 a more modernistic aesthetic that, if you squint hard enough, still looks like it belongs in the ThinkPad lineup. That’s thanks mainly to the logo on the lid and the red TrackPoint nubbin.

Both laptops are brand new, so we haven’t had a chance to get a feel for their rigidity. Past laptops have excelled in this area, and they’re all subjected to military tests for robustness. We expect both to live up to the ThinkPad’s reputation for excellent build quality.

Performance should be a fascinating point of distinction between these two laptops. The ThinkPad X1 Carbon Gen 10 uses Intel’s 12th-gen Core processors with their hybrid “performance” and “efficiency” core architecture, up to 14-core U or P processors with vPro optional. Intel’s 12th-gen also brings support for LPDDR5 RAM, up to 32GB, and PCIe Gen 4, up to 2TB solid-state drive (SSD) storage.

The ThinkPad Z13, on the other hand, is built around AMD’s next-gen Ryzen PRO U-series CPUs with an optional exclusive AMD Ryzen Pro. We don’t know the details on the new chips, but given AMD’s Ryzen 5000 series processors, we expect excellent performance. LPDDR5 RAM up to 32GB is also on board, along with up to 1TB of PCIe Gen 4 SSD storage.

We’re not going to predict a performance winner here until we’ve run the machines through our benchmarks. No matter what, though, both laptops should be significantly faster than current generation machines.

A vast array of 14-inch 16:10 displays are available for the ThinkPad X1 Carbon Gen 2, ranging from a WUXGA (1,920 x 1,200) IPS non-touch panel up to a WQUXGA (3,840 x 2,400) IPS touch display with new add-on film touch (AOFT) technology that enhances responsiveness. In between are a couple of OLED options, and Dolby Vision is available on the highest resolution screens. The ThinkPad Z13 offers just two 13.3-inch 16:10 options, a WUXGA IPS low-power display or a WQUXGA OLED display with Dolby Vision. Both displays support touch.

The sheer number of display options with the ThinkPad X1 Carbon Gen 10 is impressive, and you’re covered whether you want a lower resolution for better battery life or a high-resolution display for the sharpest image. The ThinkPad Z13 might offer fewer options, but they’re both good — one low-power display for efficiency and one 4K+ OLED display with Dolby Vision. Either way, you’re likely to be happy with your choices, although we’ll give the nod to the ThinkPad X1 Carbon Gen 10 for its flexibility.

The ThinkPad Z13 is smaller than the ThinkPad X1 Carbon Gen 10 but slightly heavier. Both are compact laptops, though, and should slip into a backpack without weighing anybody down.

Battery life will depend on several factors, including the efficiency of both laptops’ so far untested CPUs. The ThinkPad Z13 does have a significantly larger battery, though, at 70 watt-hours versus 57 watt-hours. Equip it with its low-power display option, and you’ll likely get excellent battery life — if the new AMD processors are anything like the Ryzen 5000 line. Of course, Intel’s 12th-gen processors are also supposed to be efficient, so the ThinkPad X1 Carbon Gen 10 might also do well.

We’re looking forward to getting our hands-on review units to find out for sure.

We’ll have to test them to see which is better

Which is better? It’s hard to say at this point, and it will be fascinating to compare them after we’ve had a chance to run them through our review process. The ThinkPad Z13 has the advantage of being brand new and sporting a unique look and feel for the ThinkPad line, but the ThinkPad X1 Carbon Gen 10 has had years of iterations and is pretty close to being perfected. The real test will be performance and efficiency given the different processors used in each machine, and that’s what we can’t wait to determine.