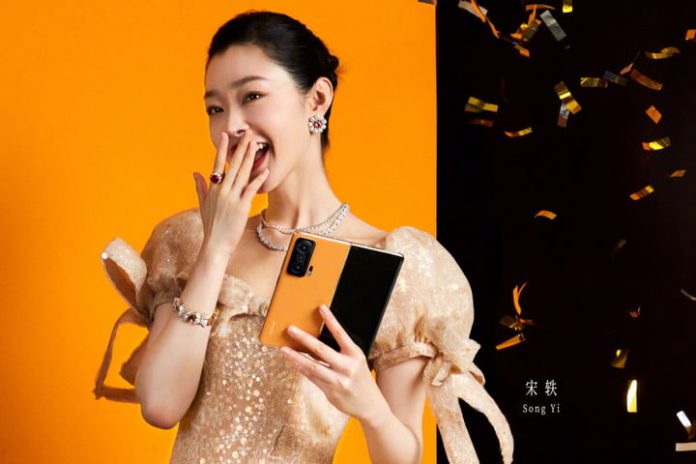 Honor has been teasing the impending launch of its first full-fledged foldable phone for the past few weeks now. The Honor Magic V first appeared in an official teaser video on Honor’s Twitter account in December. Earlier this week, the company confirmed a January 10 launch date for the phone, but Honor has tried hard to ensure we did not see a full image of the phone before launch.

Fortunately for us, Honor’s plan to keep the Honor Magic V’s chic looks under wraps fell flat on its face after the Chinese edition of Esquire magazine went ahead and posted an image of the Honor Magic V on its Weibo account. The image shows the Honor Magic V in the palm of Chinese actress Song Yi.

The unit Yi has seems to feature a hitherto unseen vegan/faux leather finish on the phone’s rear panel. Past glimpses of the phone have always shown the device in a silver/metallic trim. The image also shows the phone’s metal frame and speaker grilles that point upward. We have already seen the triple camera array in previous photos. The image also shows the power and volume buttons on the right side.

A few hours after the picture leaked, another post went up on Weibo — apparently from a launch rehearsal for the Honor Magic 3. Someone there apparently managed to grab an image of the supposed pricing of the Magic V. From the picture, we can make out that the phone will come in two variants:

While the bit about the two variants might well be correct, there is a good chance that the prices mentioned here are just there as placeholders. Even though the Honor Magic V may never make it out of China, in the eventuality that it does, it will need to be priced on par or well below the Samsung Galaxy Z Fold 3 for it to be even remotely competitive.

From what is known thus far, the Honor Magic V could likely get the Qualcomm Snapdragon 8 Gen 1 chip and will run Android 12. If it launches outside of China, the phone will also support Google Services. Other rumored features include a 50MP primary camera, support for 66-watt fast charging, and high refresh rate internal (120Hz) and external (90Hz) screens.