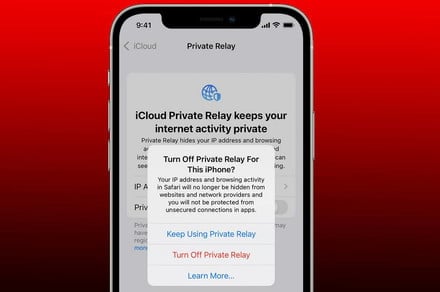 With iOS 15, Apple introduced a privacy-centric tool called iCloud Private Relay that acts somewhat like a VPN and prevents internet service providers from logging users’ web-browsing activity. But it appears that telecom operators are not fans, as according to user reports, the likes of T-Mobile and AT&T have already started blocking it.

People trying to enable Private Relay on their phone are greeted with a service denial message that says, “Your cellular plan doesn’t support iCloud Private Relay.” The reason behind it varies, depending upon whether you live in the United States or the United Kingdom.

Here’s what it shows when you click the “Learn More” pic.twitter.com/Xb9QyF67Am

An internal note shared by The T-Mo Report suggests that T-Mobile already offers some online protection tools to its customers. One of them is T-Mobile’s Web Guard, but Apple’s Private Relay appears to be interfering with the carrier’s service.

Folks subscribed to its Home Office Internet might also face difficulties enabling Private Relay on their Apple devices, as T-Mobile’s enterprise-focused cellular-based Wi-Fi network service is bundled with its own website filtering tool. However, it looks like even users who don’t have any of T-Mobile’s “safety” tools enabled on their cellular plan are also facing the Private Relay ban.

Private relay has always cut off for me on cellular (AT&amp;T). See message: pic.twitter.com/483NAaPTqD

“Customers who chose plans and features with content filtering (e.g., parent controls) do not have access to the iCloud Private Relay to allow these services to work as designed. All other customers have no restrictions,” T-Mobile said in a statement shared with 9to5Mac. But it’s not just the U.S. where users are running into Private Relay activation issues.

Singing a different tune in the U.K.

The likes of EE and T-Mobile have already started blocking Private Relay in the U.K. According to a report from The Telegraph, several carriers have asked the European Commission to outlaw iCloud Private Relay because it undermines “digital sovereignty.” A consortium that includes T-Mobile, Telefonica, Orange, and Vodafone claims that Private Relay prevents carriers from managing their networks and accessing vital network data and metadata.

Hey @EE Care to explain why iCloud private relay is blocked from your network? I don’t recall seeing any such clause in your terms and conditions. pic.twitter.com/yuZFbgUoSq

In a letter sent to the European Commission, top execs of the four carriers asked for Apple to be classified as a “digital gatekeeper.” Doing so would mean Apple violates competition laws, eventually forcing a ban on a controversial product like Private Relay. Apple is already under antitrust scanner for its “walled garden” approach toward its hardware and software ecosystems, with the likes of Spotify currently engaged in a heated battle with Apple over alleged anticompetitive tactics.

Why does it matter?

The ban on Private Relay matters because the feature aims to hide the digital breadcrumbs left by users as they browse the web. Stuff like web-browsing habits and user-identifiable information fetches a high price on the market, and it is employed for targeted advertisement. And that’s how the likes of Google and Facebook fill their coffers with millions upon millions of dollars in ad money.

That also explains why an antitracking solution like the App Tracking Transparency didn’t sit well with Facebook. But these digital breadcrumbs are widely misused, too. Just look at how the Cambridge Analytica scandal exploded in Facebook’s face. But in the case of Private Relay, both the carriers and Apple might end up engaging in some serious back-and-forth legal drama, especially in European countries.