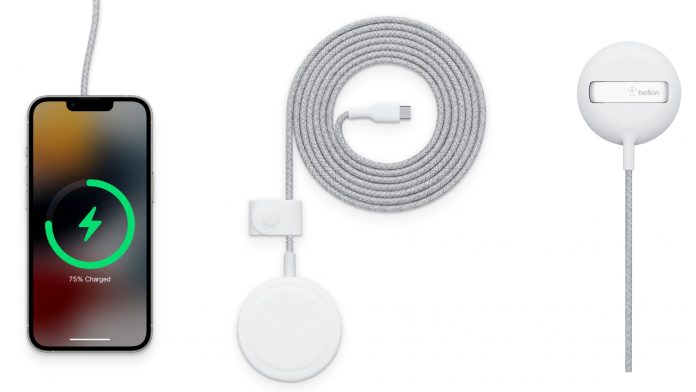 Belkin today came out with a new $60 MagSafe Charger, which offers MagSafe charging speeds and adds an additional feature — a built-in kickstand.

Available in black or white from the online Apple Store, the Boost Charge Pro Portable Wireless Charger Pad With ‌MagSafe‌ offers 15W charging speeds for most iPhone 12 and 13 models. The exception is the ‌iPhone 12‌ and 13 mini, which max out at 12W with ‌MagSafe‌.

Belkin is one of the only Apple accessory companies that has been able to release ‌MagSafe‌ accessories that are using Apple’s actual ‌MagSafe‌ standard. Most of the magnetic accessories on the market are “MagSafe-compatible” and are limited to 7.5W charging because ‌MagSafe‌ is only available via hardware supplied by Apple, similar to how the Apple Watch charging pucks work.

At $60, Belkin’s ‌MagSafe‌ Charger is $20 more expensive than Apple’s own MagSafe Charger, but the built-in kickstand and longer braided cable length may be appealing to some. The Boost Charge Pro Wireless Charger can be purchased from the online Apple Store or directly from the Belkin website.

Note: MacRumors is an affiliate partner with Belkin. When you click a link and make a purchase, we may receive a small payment, which helps us keep the site running. Tags: Belkin, MagSafe
This article, “Belkin Launches New MagSafe Charger With Kickstand” first appeared on MacRumors.com