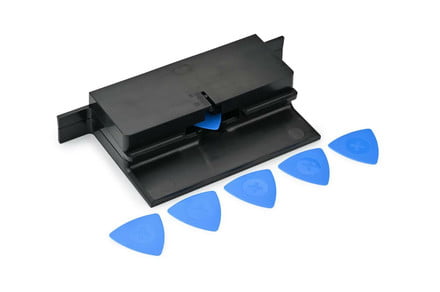 Microsoft continues to make strides as the Right to Repair movement gains traction, partnering with iFixit to release Pro repair kits to technicians for its Surface devices. It’s a big win for Right to Repair.

The repair kit is available as part of the iFixit Pro program and is not available to average consumers — at least right now. However, the kit features some handy tools that will help technicians add to the life cycle of Microsoft devices for their customers.

The Surface Display Debonding Tool helps separate the screen from the rest of the product. The device guarantees that an opening pick does not go too far into the body when trying to separate the screen. It is designed for the Pro 7+, Pro 8, and Pro X.

The Bonding Frame is designed to work with weights and helps apply even pressure to get a strong adhesive bond when the display is being reattached after a repair. This product is meant for use on the Surface Pro 7+, Surface Pro 8, and the Pro X.

All of these products were designed by Microsoft but produced and sold by iFixit.

This is yet another move by the tech giant that leans into Right to Repair. Last month, the company announced the Surface Laptop SE, a student-oriented laptop designed for simple repairability. It is set to launch in early 2022. We’ll have to wait and see how repairable it actually is.

This news comes just a few weeks after Apple announced that it would offer repair kits for its devices as well.