The Moto Watch 100 could be Motorola’s lightest smartwatch yet 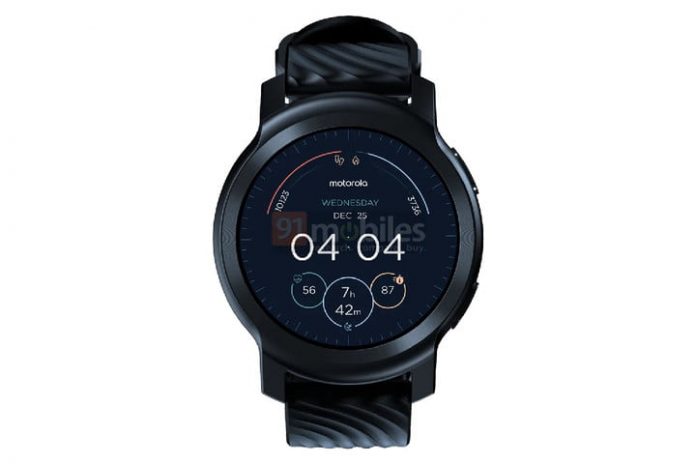 A new Motorola smartwatch is on its way as renders and specs of the Moto Watch 100 leaked online in advance of its anticipated launch. CE Brands, the current owner of Motorola-branded smartwatches, has already said it has completed work on a Moto Watch 100, which is tipped to be an affordable offering.

The latest development comes from 91Mobiles. The publication has shared renders and purported specs of the upcoming Moto Watch 100. It reveals a circular display with a minimalistic design. The right edge seems to house two buttons with a metallic finish, while the watch body could have a matte finish. It might appear from the renders that the Moto Watch 100 could sport a rotating bezel, but the report says the device will not have that feature.

The Moto Watch 100 is said to have a 1.3-inch circular LCD with a 360-by-360-pixel resolution. It could measure 42mm by 46mm by 11.9mm and weigh 29 grams, which would make it the lightest Motorola smartwatch. The smartwatch is rumored to pack a 355mAh battery. It could offer Bluetooth 5.0 connectivity, instead of theBluetooth 5.2 found on the latest wearables. It is still unknown if the smartphone will run Google’s new WearOS. The Moto Watch 100 could run a real-time operating system since it is said to be an entry-level device.

The upcoming Motorola smartwatch could feature a heart rate sensor, accelerometer, gyroscope, HRM, SP02 sensor, and ambient light sensor. It is said to offer sleep tracking and a step counter. There is no information on the number of sport modes that will be available on the device. It is likely to launch in the following weeks. Two more Motorola-branded smartwatches are also expected to launch by the end of March 2022.