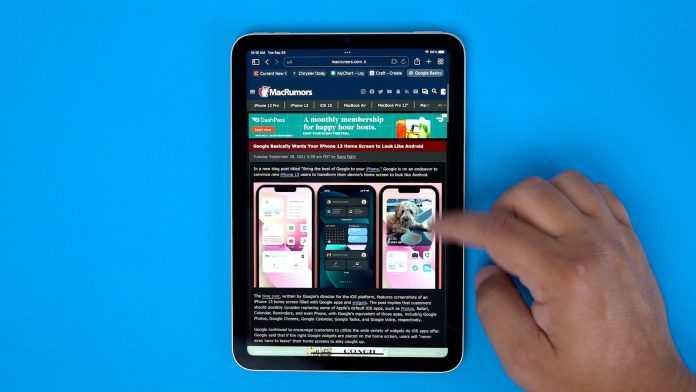 A new rumor claims that Apple is working on a future 8.3-inch iPad mini that will feature a ProMotion display, allowing for a higher 120Hz variable refresh rate, compared to the current 60Hz offered on the smallest iPad.

This past fall, Apple updated the ‌iPad mini‌, completely redesigning the smallest ‌iPad‌ and introducing an edge-to-edge display, Touch ID in the power button, an A15 Bionic chip, a USB-C port, and other features that brought it to parity with the rest of Apple’s tablet lineup.

However, the ‌iPad mini‌ 6’s display has faced some criticism for the “jelly scrolling” effect which is evident to some users when reading on the device in portrait mode. Since LCD screens refresh line by line, there is a tiny delay between when the lines at the top and lines at the bottom are refreshed. While this is normal behavior for LCD screens, it can appear more obvious when observed on the ‌iPad mini‌.

Today’s rumor posted on a Korean forum and shared on Twitter by @FronTron, claims Apple is testing a Samsung-supplied display for a future ‌iPad mini‌ in the same 8.3-inch factor that will support ProMotion technology.

ProMotion is Apple’s variable refresh rate display technology that allows a display to run at as high as 120Hz. The feature is currently only offered on the 11-inch and 12.9-inch ‌iPad‌ Pros, and just recently, the iPhone 13 Pro and the new MacBook Pros.

The notion that Apple would bring a feature exclusive to its higher-end devices to its smallest ‌‌iPad‌,‌ which is designed for portability and everyday use, may seem unlikely, but it does become more plausible if the “jelly scrolling” issue is taken into consideration.

The reason the jelly scrolling effect only occurs when the tablet is in portrait mode is because the controller board that drives the line-by-line refresh of the display is oriented vertically, and the portrait orientation doesn’t match its placement.

Indeed, the iPad Pro also has a vertically oriented display controller board. However, while jelly scrolling still happens on the high-end ‌iPad‌ in portrait mode, the Pro’s 120Hz refresh rate all but masks it to most human eyes. All of which is to say that if Apple brought ProMotion to the ‌iPad mini‌, it would essentially resolve the jelly scrolling issue.

That said, the source of this rumor remains unknown and we are therefore still filing it under “sketchy.”