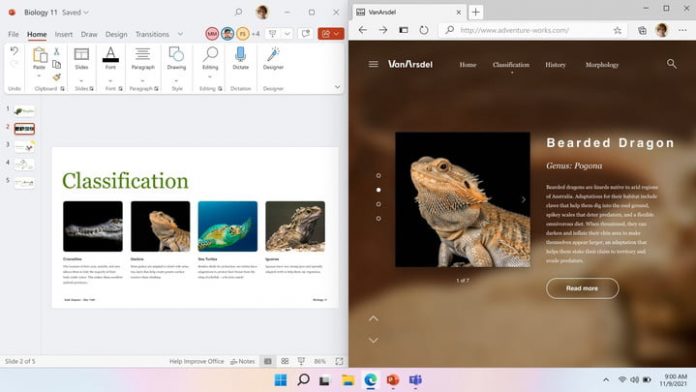 Microsoft has announced a new version of Windows 11 and an ultra-cheap Surface device, both of which are aimed at taking back the classroom from the domain of Chromebooks.

Windows 11 SE is a slimmed-down version of Windows that makes it simpler and easier to use, and it’s paired with the $249 Surface Laptop SE. Microsoft thinks that these two in combination will create an optimized learning platform for children.

Windows 11 SE is not replacing Windows in S Mode. Rather, this is a specialized education version of Windows 11 that greatly simplifies the operating system to minimize distractions for students, particularly younger children.

For example, applications open in full-screen mode by default and Windows Snap only allows two panes instead of the litany of options introduced in Windows 11. The Microsoft Store and widgets bar are removed entirely.

Schools can push specific applications they choose to the devices.

Microsoft said that it also wanted to simplify things for IT admins and greatly reduce headaches. Administrators will be able to manage the fleet of Windows 11 SE computers using Intune for Education. They will also be able to customize Windows 11 SE depending on the institution or individual classrooms. For example, schools can push specific applications they choose to the devices and restrict the use of others. Schools can also customize the Start experience to make it easier for teachers to instruct younger students on what work to do.

Microsoft includes all of its Office 365 suite of applications such as Word, PowerPoint, Teams, and OneNote, along with the Chromium Edge browser. Microsoft specifically pointed to the ability of IT admins to add custom Chromium extensions., although admins can still push Google Chrome to the students’ computers if so desired. Microsoft is partnering with a number of manfacturers to push out Windows 11 SE-enabled devices. So far, this includes HP, Dell, Acer, Asus, Dynabook, Intel, AMD, and Lenovo.

Microsoft itself is also releasing the Surface Laptop SE. At only $249, it’s the cheapest Surface that Microsoft has ever made and is poised to compete with the broad ecosystem of budget-friendly Chromebooks out there.

The company is aiming this version of the Surface Laptop squarely at the K-8th grade market. That’s clear from the looks of the device. It’s chunky, has large bezels, and is made out of plastic — not unlike the Chromebooks it’s designed to compete with.

It’s quite portable, though, with an 11.6-inch screen and weight of just 2.45 pounds. Microsoft even says you can get up to 16 hours of “typical use” on a single charge with the Surface Laptop SE.

The specs, though, aren’t too impressive. It starts with only an Intel Celeron processor N4020, 4GB of RAM, 64GB of eMMC storage, and a 1366 x 768 resolution display. That’s a pitiful screen resolution, even for an education device of this size.

The device also comes with a 1-megapixel webcam, stereo speakers, and a single digital microphone.

Microsoft also wanted to emphasize the reparability of the machine. Anyone with young children can understand the need for a device that is durable. Many components such as the display, keyboard, battery, and even the motherboard can be replaced.

There were leaks even before Windows 11 was formally announced that hinted at the existence of Windows 11 SE. The Surface Laptop SE was reported on by Windows Central as recently as last week. Microsoft’s focus on the education market is understandable as Chromebooks have been by far the leading educational computing platform. Chromebooks made up almost 60 percent of the K-12 market share in 2018.